Warning: Creating default object from empty value in /home/customer/www/optionpundit.net/public_html/wp-content/themes/salient/nectar/redux-framework/ReduxCore/inc/class.redux_filesystem.php on line 29
 How Implied Volatility Can Make Money, A Lot of It - Learn to Trade Options | #1 Options Trading Education

How Implied Volatility Can Make Money, A Lot of It

How Implied Volatility Can Make Money, A Lot of It

The most powerful force is an “invisible” one; because you can always prepare for the visible forces but the one that can cause most gain or pain is the one that you can’t see. Implied volatility is one such force when trading financial markets. I introduced Ms Vega as personification for Implied Volatility. Depending upon which side are you at, Ms Vega can either bring lot of money to your portfolio or can easily make you cry. Those who don’t know about implied volatility, pls click here to know more about it.

It is a commonly known fact amongst options traders that before earnings announcement, implied volatility of underlying increases. Let’s stay with the simple facts-

Insiders/Outsiders who might have “earnings date” can make a lot of money. All one need to know a) the earning date with certainty and/or b) changes in the earnings date before those are announced to the public and bingo!!! Let me explain this more with the following two examples- 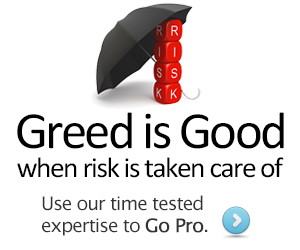 Priceline (PCLN) was expected to announce earnings during the week of Feb 14th. Since the date fell during the Feb expiration cycle, IVs of Feb options were HIGHER as compared to Mar options. If you purchased a Feb straddle few weeks earlier, rise in IV leading into the earning would bring you nice gains. However, on Feb 4th, PCLN announced that earning will be be announced on Feb 23rd, which falls into the March expiration cycle. As soon as market opened, Feb IV dropped like a stone. If you sold a 435 straddle on Feb 3rd, then simply due to this IV drop, the Feb straddle would have given you almost +38% gains (Screenshot attached using thinkback analytics). Mar IVs didn’t rise as much though and the underlying also didn’t move much either.

Keep in mind that above prices are as of Feb 4th close and by market closing hrs Feb IV had risen almost 5 points. If sold at the market open, gains would have been even more bringing sum to about 42-45% for one day holding. 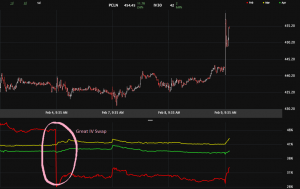 In a matter of few days, we observed similar thing on Wynn Resorts (WYNN):
Wynn Resorts’ (WYNN) earnings were confirmed to be announced after market close on Feb 24th. But on Feb8th, just 5min before market open, WYNN announced that its earnings will be announced on Feb 10th, after market close. Thus earning month shifted from Mar expiration cycle to Feb expiration cycle. Here is what happened to a hypothetical trade i.e. Buy Feb $120 straddle/ Sell Mar 120 Straddle on Feb 7th; the profit would have been about +9%. If However, you purchased a Feb 120 Straddle, than gains will be +23%.

Just like PCLN example, here IV dropped almost 3-5% going into the day close. If above trades were closed at the market open, results would have been much higher, especially for the Feb $120 straddle. 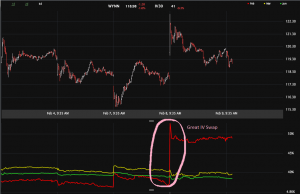 Albeit, two things were different in WYNN’s example vs. PCLN trade-

I was skeptical of this and hence I tried to see if there was anything unusual. I found that for Feb 125 call strike, option volume was heaviest on Feb4th and Feb7th, much larger than open interests (it was a manual work so I can’t share screenshots). So I plotted Feb 125 calls price with respect to underlying WYNN’s price and option volumes. Pls look at the picture below and notice that if you had a simple Feb 125 OOM calls on Feb 4th/Feb 7th, the value almost tripled. 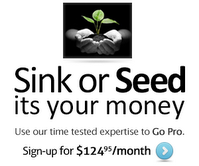 I don’t know if there were insiders or not, and I guess I will never get to know. Ms Vega has her own charm. She is a powerful invisible force in the options markets. If you understand how IV behaves with respect to underlying (and related events) movement, you could reap more and more benefits. Here is a book on Implied volatility that I reviewed some time back. It  might help in understanding some concepts on how to view Implied Volatilty with respect to options trading.

At OPNewsletter, we are in love with Ms Vega and we employ a lot of strategies using Implied Volatility especially for the earnings event. If you would like to become a member, pls click here to sign-up (waitlist FEE is current waived, Update as of Aug 31, 2103)