Time Is Now, Not Later

Time Is Now, Not Later

It was start of winters in Kobe, Japan. While sipping coffee in a “Gaijin” restaurant in Sanomiya , I was thinking “this is irrational”. How could money making be so easy for everyone that I talk to me but for myself? Even the coffee-shop owner was giving me tip which is the next .com I should invest. “What if” meant nothing to them as returns were accumulating day by day. Albeit, the stocks I was investing in weren’t doing great and I was playing cat-n-mouse without any luck; then came huge decline of 2000 and my capital was wiped out never to be recouped again. Enron and WorldComs’s failure were thought to be exceptional during those time.

Then 7 years later, I couldn’t understand it again. When almost half the world was crying for rice, food basket was more expensive then the day before and real earnings were dropping, Oil was above $120/barrel, companies were raising prices, property prices were escalating BUT wages were not keeping pace. I wondered how long it could go before we would see a sharp pullback (subprime issues had started to make inroads) and we had > 50% quick wipeout in the stock market. We saw the biggest bankruptcy in the history i.e. Lehman Brothers and biggest financial crisis since Great Depression.

Here we are again, 3 years later in 2011; I haven’t looked into the statistics as I don’t think that published data is really useful. I’ll keep it simple. Look at the Macro pictures, Unemployment is still record high, US is deeply sunk into debt which I don’t think it will be able to pay (but that’s me); Food inflation is running high (India had 17% food inflation in year to Jan 22’11), Brent crude is over $100 again, food basket is again prohibitively expensive, real wages are falling, Africa is boiling, revolutions to change decades old regimes are in full swing, food riots are resurfacing, commodities are surging (and we are about to see surge aka speculation again), and Banks announcing great results/great bonuses thanks to creative accounting rules… 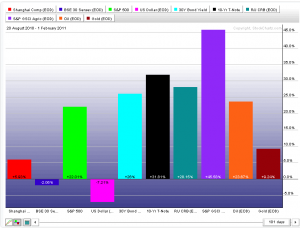 Since QE2 was announced, emerging markets like China and India, havn’t gone anywhere, S&P is up almost 22%, US Dollar is down over 7%. Bond Yields which were supposed to go down (wasn’t that Uncle Ben wanted via QE2) have in fact gone up by over 25% to 30%, Commodity index is up over 28% and hold your breath, Agriculture index is up 45%!!! Oil is up about 23% and gold (which is correcting currently) is up 9%. Did you see the wealth effect that Mr Bernanke talked about?

11 years, 2 massive declines of over 50%, 3 rampant inflationary/speculative periods; did we, the retail investor, learn anything? Who lost during these periods? Is it you or the “Gods of Market”; Who was “Too Big to Fail”? I don’t think anything fundamentally has changed. I am afraid that this might again end badly. Well, I don’t have the answer and I don’t think anyone has it. Read Bill Gross or John Hussman for some hints. 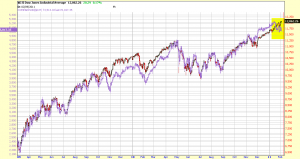 You may want to pay attention to recent divergence between Dow Transports and Dow Industrial. Though this is not conclusive of anything as one of the indices may continue to lead the way and other one may turn up again, but be cautious when the divergence starts to emerge. This is the first time that a clear divergence is seen since Mar’09 bottom.

Bottomline– Enough of bearishness, what to do? What actions can one take? No one can forecast the market accurately and none can pick tops and bottoms. Bears and Bulls are mostly in the hindsight. Currently there are large forces in the market that want to support it so don’t fight the fed and don’t fight the tape. Albeit, get ready.

And while some may say, cash is useless and cash in the banks doesn’t earn you anything blah blah; do you remember the Mar 2009? How about if you had excess cash during that time? Do you remember Warren Buffet’s golden deals with Goldman and even GE? Cash is King (usually with the hindisight bias). And I think, we might have that opportunity again.