US Presidential Elections- How Will Stocks React?

US Presidential Elections- How Will Stocks React?

Do presidential elections affect US stock market? How will stocks react to Mr Trump’s or Mrs Clinton’s win?

Based on historical data, it may not be smooth sailing for the stock market this year. Since 1900, On average, The S&P 500 has dropped an about 1.2 percent in 4th year of second presidential terms. 2008 was specially notorious, when market pulled back approximately 40%, and it also happened to be Mr Bush’s last year  of his 2nd term in the office.

2008 was a year you probably you don’t want to remember; a year when many people were re-structured, unemployment was surging and the housing crisis was its peak. Even the serious, professional investors were suffering from the stock market collapse.

It is also worth noting that even though the S&P 500 was down an average of 1.2 percent during year eight of the presidential terms since 1900, it experienced positive growth in some years. Forty-four percent of the years in that period saw a rise in the S&P 500. Although that data point doesn’t convince some analysts this year could see gains in the market, it may offer some investors a glimmer of hope for a recovery from recent declines before the year is over.

As widely know, Presidents can be a bit unpredictable during their final year of a second term as they come to face their limited time left in office. Unpredictable behavior combined with a lack of consensus of who the next president will be can fuel a lot of uncertainty that can upset the stock market.

Jeff Hirsch, editor in chief of the Stock Trader’s Almanac, describes exiting commander-in-chiefs as “lame duck presidents with little political capital left,” who as a result “push through policy initiatives by executive orders and any other means possible.”

Hirsh also said, “The eighth years of an incumbent’s term in the White House have all been pretty horrible for markets with the exception of 1988 when Ronald Reagan was leaving office. And the first five months of an election year are generally very telling. If you’ve got a down year, that’s usually indicative of the incumbent White House party being ousted. That clearly puts a dampener on Mrs Clinton’s prospects. As they say, the stock market is like a voting mechanism.

Through the lense: A 4 year presidential cycle

As per historical data, The fourth year of a president’s first term tends to fare much better. Some associate the general trend of incumbents getting reelected as a reason why there is less panic in the stock market during those years as compared to year eight. Since 1900, 83 percent of the time year four of a president’s first term has seen an average gain in the S&P 500 of 11.5 percent.

Pre-election years have performed the strongest when looking at four-year cycles, which clearly stand out in the below chart. 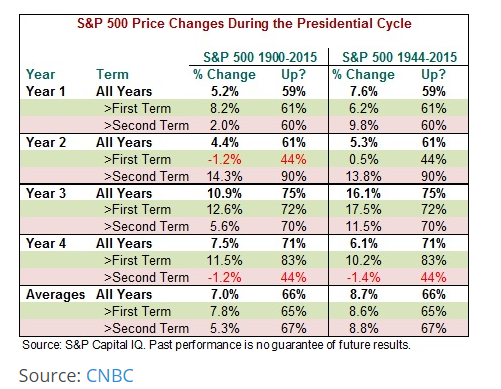 Yes, parties to impact the outcomme for the stock market. Which party is likely to be voted into office during an election year can also affect how stocks perform, especially as the election date approaches. Typically when people believe the incumbent party will get elected, the market goes up. If consensus points towards a new party taking over, however, the stock market tends to go down. Uncertainty and fear can cause increases in volatility compared to feelings of confidence and the familiar.

There can be inductry specific impact based on which party the new president is from. For example, pharmaceutical companies could experience gains with a Republican taking over since many Democrats want to cap drug pricing. FYI, just recently Eli Lilly (LLY) stock price pulled back sharply when Mr Sanders tweeted about the cost of Humalog insulin.

Coal is another industry that might rebound with a Republican in office since they typically are not as strict with air-quality regulations and the industry experienced close to an 80 percent decline in 2015. There are many notable plays that are waiting for some breathing space.

Role of November and Post-Election

First, lets go back to 1960 to view Nov only data, we find that there is a bias for the month to end positively 61% of the time. In other words, 3 out of every 5 months finished in positive territory, which is why it is included in the seasonally strong period of the entire year. Furthermore, the average and median returns for the month top 1% over the course of that time.

However, when we look at just the November months when elections are being held, we find 50/50, well almost, split of wins and losses. Even though the number of months are evenly split between gains and losses, the average and median returns were still positive over the given time frame.

Unfortunately, average and median returns aren’t representative of the capital loss hat have taken place historically, such as the massive drawdown during the 2008 election. Importantly, in order for the market to have an average return of 1.01%, it means there has been a variability of returns both above and below that average.

However, during election years, we see the same periods remaining weak, but more dramatically so, as the volatility of election years skews the average of all years. In other words, regardless of who is elected on the 8th, look for a relief rally on the 9th, followed by a sell-off over the next few days? The traditional post-Thanksgiving rally tends to be stronger performance-wise during exceptionally light volume trading days.

How can you profit/protect your portfolio?

One way is that you trade directionally, do a through analysis, find out the appropriate sectors/companies that will benefit from most likely candidate’s winning. However, with so many uncertainties lying ahead, one thing seems sure; the probability favors for volatility of the overall market to rise until the time the results of the elections are out in Jan 2017. Also don’t forget that we are within 5-7% range of all time high.

Using volatility as the main instrument, the best strategy might be LONG VEGA strategies or simply buy those products which benefit from positive Vega like long VIX Calls or long shares of VXX.

I am of the opinion to sell 90% probOTM VXX puts until results are clear.

Selling Put options is a bullish strategy. Thus by selling put, essentially, it is long volatility trade. However, by compbining with high probability factor, it gives us higher chance of being profitable, even if we are wrong.

(Disclaimer- This trade idea is intended for education and entertainment purpose only. You should talk to your investment adviser and do due diligence before taking any action based on what’s written below).

If you are looking for a quick, easy-to-understand, simpe primer/intro on options, here is our most popular ebook. You might want to download as long as we are distributing it for FREE.

Let me know what do you think? or should you have another idea that you would like to implement for trading the markets during this cycle.

(Disclaimer: This post provides you with key observations, collected from various well documented sources such as Yahoo Finance, Motif investing, Seasonal Cycles, etc. I have added few additional thought on how can you use these conclusions to trade markets in the near short-term.)