Why and Who is Buying Puts now?

Why and Who is Buying Puts now?

Markets are rallying, but then why and who is buying those S&P500 puts? Why is there such a steep premium between VIX Cash Index and VIX Future prices. The Spread is at the widest. The CBOE Skew Index is in the top quartile, Credit Suisse Fear Barometer (CSFB Fear Index) is at record levels. If everything is rosy, then why such bearishness?

To explore more, On Friday I was discussing with Bill Luby author of Vix And More (An educational interview with Bill) about the steep premium that is reflected in the VIX future prices. The discussion also involved how and what kind of option trading strategies we could use to benefit from such an environment. The discussion pointed me to an article written by Mr Lawrence McMillan in Aug 2010. I shall strongly encourage you to read that article (Here is the original article) by Lawrence who is one of the original thought leaders of option trading world.

McMillan observed that On Jul 20, 2010, the largest premium spread between VIX Cash Index and VIX Futures was about 9 point and such a steep premium comes towards the end of a rally. He also provided some historical references-

There is some precedent for this. Note that the current differential between VIX and the highest futures price is about 9 points. That’s the highest/steepest on record (there were bigger futures discounts in the fall of 2008, but there have never been larger futures premiums). Two other times this year, the term structure became very steep. The first was in mid-January, when the differential between VIX and the highest futures price reached about 7 points. A severe market decline of 100 SPX points (intraday) followed very quickly thereafter. The second was in late April, when the differential reached 8 points at its steepest. SPX soon followed with a drop of 180 points.

Current VIX future premium over VIX cash index are one of the largest seen in the history. Even higher than what was present during Jul 2010. On July 20, the highest spread was between Jan 2011 and VIX and it was 9.02. As of Yesterday close, the highest premium spread between VIX Cash index and VIX futures is +11.56 for Oct 2012 and onwards. Pls see attached Chart for the VIX Futures premium. Actually it is almost 2.0 points lower vs. what I shared with OPNewsletter members on Friday Feb 24, 2012 when the largest spread was +13.7!!! 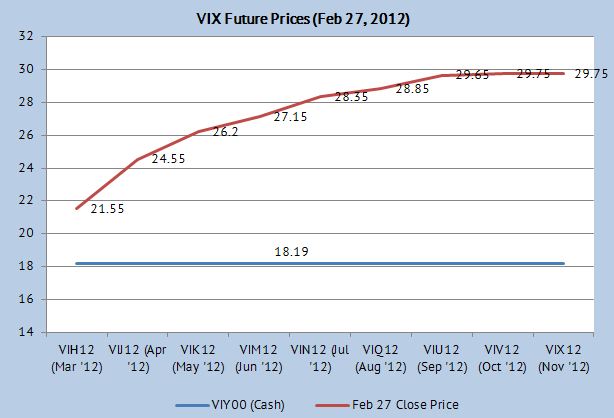 Naturally such a high level of fear is reflected in the Credit Suisse Fear Barometer (CSFB) which is currently at 5 year high. Those who don’t know what is Credit Suisse Fear Barometer is here is the description- The CS Fear Barometer measures investor sentiment for 3-month investment horizons by pricing a zero-cost collar. The collar is implemented by the selling of a 10% OTM SPX call option and using the proceeds to buy an OTM put. The CSFB level represents how far out-of-the-money that SPX put is. The higher the CSFB level, the greater the fear. 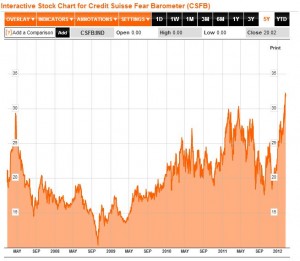 How could you take advantage of such scenario- One less speculative, hedged strategy that Mc Millan suggested was to buy VIX Puts/ Buy SPY Puts. At that time, suggested ratio for 5:3 respectively but you may choose different ratio based on your profile/ volatility analysis. For OPNewsletter members, we are using different Option Trading Strategy which has less risk if VIX stays where it is, but gains significantly if VIX spikes sharply. Keep in mind though that no one can time the markets and thus till the time VIX is not going anywhere, the premium may remain elevated and theta may eat into your gains. So keep a close eye.

You may choose ignore current market scenario and be a contrarian assuming that when such levels of bearishness exist, it’s bullish. However, I am not bullish camp and will not be bullish unless SPX can clear 1376/1385 zones. SPY again gapped down roughly 0.5% at the open but recovered to close at a 52-week high (it’s now > 5times), and VIX has been rising. This is usually not associated with great performance going forward.

In any case, whatever you choose/trade, be careful.