Warning: Creating default object from empty value in /home/customer/www/optionpundit.net/public_html/wp-content/themes/salient/nectar/redux-framework/ReduxCore/inc/class.redux_filesystem.php on line 29
 Where is the Bull? - Learn to Trade Options | #1 Options Trading Education

Where is the Bull?

Where is the Bull?

Amongst all the bearishness in the market you might think there is none except one obvious answer OIL. There are many areas that are just moving up with their own share of correction along the up way. 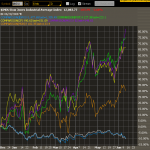 I have been mentioning my “Fantastic Four” for quite sometime. Even since my last post, in just less than two weeks POT is up >+10%, MOS is up >+20%, CF is also up >+10%, and MON >+5% after touching 52wk high. In fact, Intrepid Potash (IPI) touched 52wks high today (My post here). But keeping them is not easy and requires guts, well more than guts it is how well one hedges against any sharp corrections on the way up. A very simple and popular way will be buy puts and fund the cost by selling calls. For instance POT is currently $223, so you buy 220 puts and sell OOM calls to offset the cost of puts. I shall cover this in more details some other day.

Another sector on the roll is coal. Check out the PCX, ANR, BTU, FDG, and ACI. Oil has its impact of alternative energy fuels as well. As Oil prices are climbing higher, all other energy resources are becoming cheaper relative to oil. One may argue why Rails are falling apart, but there is more to rails than just oil’s rise. But still it’s not a beaten down sector if you look at short term horizon of say 3months.

Above are just two examples. You may find even more. However, as these are moving-up, the risk of their fall is also increasing. So be careful about your entry and exit points.

Last point, the bull is on the downside as well. It’s all a matter of perspective. Almost similar strategies can be created for the downward move. However, the risk is higher. Our human brain in general is “bullish” so at the first moment of upward move (assuming I am bearish), I am more “panicked” than if I would if I were bullish and if there was a reversal.