Warning: Creating default object from empty value in /home/customer/www/optionpundit.net/public_html/wp-content/themes/salient/nectar/redux-framework/ReduxCore/inc/class.redux_filesystem.php on line 29
 Where Are We Heading Now? - Learn to Trade Options | #1 Options Trading Education

Where Are We Heading Now?

Where Are We Heading Now?

Tough Markets, the worst June for Dow since the great depression of early 30s. The Dow is down nearly 9.5%, S&P500 nearly 8%, RUT nearly 5.5% and Nasdaq nearly 7.5% for the month of June so far and we still have one more trading day left. Dow Jones industrial average is down nearly 20% since it’s all time of 14,198 in Mid Oct’07. Clearly we are, at least, in the short term bear markets.

Goldman Sachs said “Conviction Sell” for Citibank. The most brilliant bankers on the street are saying this “now” when Citibank has already lost 2/3 of its market value since the peak just about a year ago, impressive! Isn’t it? is that what you expect from the top notch professionals to realize this so late, the same guys who were betting against the subprime and made fortunes. I still have a long way to go to learn what goes on the Wallstreet. Even yours truly, on this site, as early as November had openly mentioned his bearish stand on Citibank and to the extent that he doesn’t want to keep much cash there. I talked about CFC, FRE, and FNM when those were still high fliers.

Coming back to Markets, I am looking at the big picture for both Dow and S&P500 and there are are a few things that I would like to share with you. 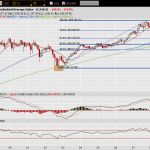 Attached is a 20Year, Monthly chart of Dow. I generally, not necessarily always, look at 12month, 60months and 120month moving average to develop one of the big pictures. As you will notice, Dow briefly touched the 60 months MA @11,300 and is sitting almost there. The previous significant bottom was around 2003 (Just before the Iraq War) and the peak was Oct’07. If we use these two as data points, you will notice that Dow has fallen below 61.8% fib retracement, not a good sign. Another support area, that I consider to be a major support is 50% retracement i.e. 10,697 which is almost in the same vicinity as 120months moving average a very solid support area that has been touched only once in last 20years. Another worrisome part is that MACD monthly histograms have not yet completed it’s cycle and RSI is not in the oversold area. Though on daily charts basis, it’s in the oversold reason and we may see dead cat bounce, but I will be very cautious as markets may still have way to go before finding any meaningful bottom. 11,300, followed by 11,000 and finally 10,700 are the area I would be watching closely.

The story is almost similar on S&P500 but it has some other twists its story. S&P 500’s 61.8% retracement since Mar’03 bottoms is 1270 and that’s where it bounced back on Friday. It is sitting right there AND it is also sitting on 60months moving average that I mentioned above for Dow. But what’s keeping me awake on S&P500 is the VIX. There hasn’t been any panic reflected by high VIX so far. I am attaching a chart for SPX vis-à-vis VIX and you’ll find VIX is nowhere near the last highs when markets sold off. S&P500 is also in the same territory as far as MACD and RSI is concerned. So, same story, on daily basis, it is oversold, but on long term basis, it is not. I shall be careful of 1270, 1225 and finally 1172.

There are a lot of other things going on in the equities market. India is down, China is down, people have lost lot of money in these markets as many of the “investors” are for first time experiencing bear markets in their recent “prosperous” life time , Japan is down, Hong Kong is down, Europe is down and heading for worst 1st half in last 20 years, Dollar is down, Oil is up, short-selling interest is amongst the highest level, banks are most down, Baltic dry index is slowing, new lows on NYSE is increasing, commodities are rising leaving less money for spending and in fact in some parts of the world it is triggering riots, and many more things to come.

No one can manage your money better than yourself, and hence preserve the capital as much as possible. Cash will return much better returns than being fully invested, how? Because you will be able to buy things at much lower prices if markets were to fall further. There is no harm in missing an “opportunity” as one can always participate in bull rallies but panic selling doesn’t give time to get out. Panic selling doesn’t let one think straight and therefore may result in decisions that may be even worst.

And I wonder if “The day” is still ahead. Let me remind you of the old saying, In the bear markets, the winner is the one who loses the least. Choose your asset classes right, if you were to still remain invested.

For OPNewsletter, we are 65% in cash for the month and we shall take advantage of the upcoming bounce that we may see.