Dow dropped below its 200wk moving average, one of the indicator that I look, at times, for determining long term trends to develop a macro picture. This is not a good sign and it has never dipped below that since 2004. We’ll see how S&P500, Nasdaq and other major indices do. We still nearly 4 more hrs of trading left and if Dow closes below 11600, that’s a worrisome sign.

There was nothing new in today’s reaction except the gold which I was expecting to happen yesterday. It was just a day later. Recall in my post yesterday, i mentioned two scenarios and my bias.

Raise rates and economy falls into recession “officially” and don’t cut the rates then commodities, metal, and oil all surge to new highs. What to do? My best guess is that rates will remain unchanged at least for this meeting. For the first scenario, markets may remain where those are currently. There may be little bit of uncertainty, initial rallies and then dust will settle.

Dow closed almost flat just to fall back today. Gold is rallying, metals are higher and so is commodities, initial rallies and then dust settles, exactly the scenario that I painted in my blog post y’day. There is nothing exceptional in me for posting that, it’s the history that repeats time and time again. 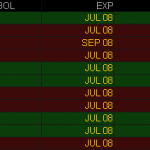 Some thoughts about huge %%: Let me share some of the trades with you (I mentioned about those on the forum to the OPNewsletter subscribers) that will explain how important it is to not fight with the market and keep a very open mind and tight profit/loss. Sometimes I just don’t have time to write details of each trade and therefore I just share the underlyings and my bias for speculative trades (these are bonus trades and not part of OPNewsletter tracking) and leave it to them to choose amongst strategies that I keep sharing time to time, other times I may explain fully. Albeit, I am worried about sharing the bias because it can completely u-turn by the time I am done with my msg….

Total emotionless, but you know what, it is stressful. Even though, these trades might be making money and it may all look glamorous, intraday trading is tough and hard work. Don’t be fooled by those who say they can make gazillions of $$$ overnight by spending 5mins per day, not that it can not be done, but the price is too steep too.

Have fun, make money “consistently”, at the end of the day that’s what really count…