Here is a potential competitor to Netflix, Facebook and the debate is heating whether or not Facebook will kill Netflix (NFLX). I don’t think I really care. Both are the products of “Technological Revolution” and as technology evolves so will new business models. What I do care though is a trading opportunity. So let the main stream media find answers to that question while we look for a trading opportunity.

Uncle Ben has been transferring “Wealth” to Americans via stock market (you believe it or not, I don’t think he cares) and during the process, I think normal behaviour of market participants in no longer normal. Under such circumstance, I don’t think forecasting has any meaning but still it is a good idea to reflect upon past trades/ forecasts to see how it turned out.

On Dec 2010, I shared a simple technical chart for Netflix raising questions that how high it will go?  Soon after that Netflix decline almost 40points. I don’t think it has anything to do with my trading acumen, it’s just a sheer luck mixed with “technical trading”. NFLX followed two channels and spent sometime outside that channel. 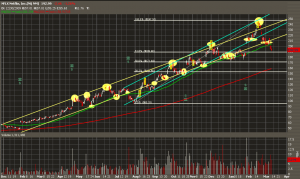 It then bounced after earnings on Jan 26th and since then made a new high of $247.55. Believer it or not, The $247.55 price point was the upper channel that started in July 2010 (short-term channel).  And since then it’s been declining again. It again found support at the lower channel of the longer term channel (Yellow). You could pretty much trade channels on NFLX during the past 18months or so.

So what’s next? How to trade this information-

There maybe lot of counter arguments on why Facebook won’t kill Neflix but the bottom-line is the same as I mentioned in my last post. It’s EXPENSIVE without any “sustainable competitive advantage”.  Facebook vs Netflix debate will take sometime before it gets credible. However, for swing trader, that’s an opportunity. The stock is down almost $55 (about 22%) and it’s time to place a bullish credit spread around 180/175 strike after it finds support. As of this writing, Dow Futures are down almost 75 points market might open lower and that’s the time to evaluate and place a bullish trade, optimum level is around 61.8Fib point ($188-$190).  Be careful though, it’s a volatile underlying, so make sure you have your stoploss/ target exits in place.

Disclaimer– As of this writing, I have bearish verticals on NFLX. I may close it anytime and I may/ maynot open the same trade as mentioned above. This is just a trade idea. Pls do your due diligence before investing even a single dollar.