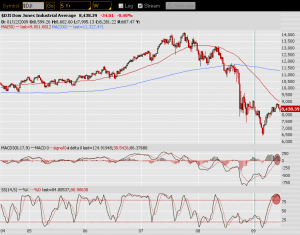 Overall an interesting week that it was, but I think there is more to come. On a weekly basis, it appears as if MACD and RSI are about to register sell signals. Mr. Market can go whichever direction it wants to, but hey, at the end of the day, this is all about probability. And as I interpret the current market data, the probability of markets going lower are higher vs probability of its rallying higher. Oh well, maybe that I am the only one still standing and claiming that it is bear market rally. The jury is still out there and soon we shall know what lies ahead as companies starts to announce earnings, and window dressing comes to a completion. Hedge funds who participated since March lows are up and probably have booked bonuses for the year.

For overall OPNewsletter, we increased investment from 38.7% to 43.3% (for an assumed 10K capital). We are up +2.64% x-commissions and +0.68% including commissions. I usually aim for +60% capital deployment but overriding philosophy here is “preservation of capital is more important than missing a potential investment opportunity”. According to Lowry’s statistics, as I interpret, in spite of a very little change in the Friday close, the markets internals almost gave back whatever it gained during Thursday’s rally. It is a very interesting market; It is seems very different on the surface vs. what lies beneath.

As I shared earlier, market internals are deteriorating day by day. I don’t know when will the tide turn upside down. If you have a long stock portfolio, you may want to erect defense lines while the IVs are lower and defense will be cheaper. For stocks, there is no harm in reducing the gains in order to protect and preserve capital. I’ll reinforce what I often say- Making money is not difficult, preserving it is.

Let the week begin, there is more economic data this week