Chicago Mercantile Exchange (CME) is hammered and hammered pretty badly. It took two years of bull run to reach the highest price ~$712 and only 5 months to come back to square one i.e. $375. Here I am presenting a short term bullish scenario.

Before I dive into charting, let me share my thoughts about charts. Charts are visualization of random occurrences that are plotted and we, humans, find out patterns (How about this chart?). Even if there is none, we create one and over decades of stock market technical data, it is even much more easier. Any charting package will include at least,if not more, 50 different kind of indicators. I am not saying that Technical Analysis is useless but it has also become a self-fulfilling prophecy. As many follow “indicators” they start to work. 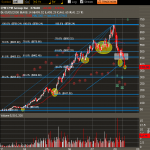 So let’s put those “indicators” to work. Here is a chart of Chicago Mercantile Exchange (CME), there are several lines, bubbles, rectangle and other blah blah. It’s a weekly chart from the day CME was listed. You will notice 50weeks moving average provided strong support and it bounce back. Once it broke that support, bottom is the limit. Recently it was 200wks moving average that provided support when it announced to acquire Nymex (NMX), it kissed $400 and bounced. It ditched the 200wks average yesterday. One may wonder why then it danced for sometime between 450-460 support areas, because that is a Fibonacci confluence area. Now that also been taken out. What next, it beautifully touched exact $375 area which was a 38.2% retracement of expansion that started from $167 in April 2004.

Now there may be other reasons and at least 100 more technical indicators pointing to opposite to what I am saying. I am biased that it is poised for a bounce. Though according to P&F charts, the next price objective is near $359 so it may very well touch that level too before bouncing in any meaningful way.

How to play this? As you may see TA will open the possibility of one being wrong. So the chances of my being correct in short-term at best are 50/50. If trade option on CME, the options are expensive (abs $$) and theta may very well downplay the delta, if chosen via straight calls and straight puts. So credit spread or a debit spread may work out nicely. Other approach maybe a diagonal spread 400/410 (currently $3.85). The downside is half the cost than buying straight call.

As usual, this is not a stock recommendation. Pls do your due diligence before making any investment decision.