0
was successfully added to your cart.

Who Will Ring the Bell?

Who Will Ring the Bell? 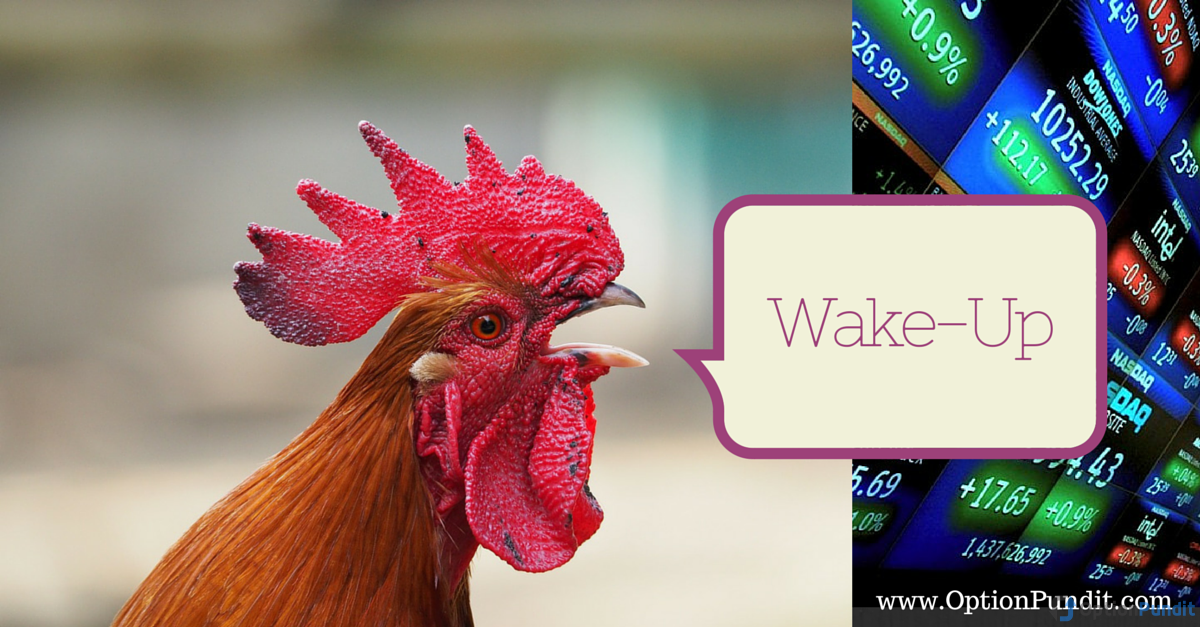 “Buy America. I am” said Mr Warren Buffett on Oct 16,2 008. He announced to the whole world that he was buying american stocks, and those who listened to him, probably made a great fortune. So will Mr. Buffect announce “Sell America. I am”?

I have great admiration for Mr Buffett. However, I don’t think we’ll ever see this. So who is going to ring the bell? I don’t know. It’s hard. I will share my three cents.

Almost 8 months and no major movement.

Call it consolidation or whatever, market price action, at best, now, is “tired”.  Since 2009, Trillions have been pumped into the stock markets (and other riskier assets) and thus market kept on marching higher and higher. But the fact is, since Fed bond purchases stopped last October, markets haven’t been rising as those were during QE times (ok…may be it is still being supported by record corporate buyback..fine). Leave aside NDX extreme on bullish side and Dow Transport on the weakest side, rest are just so so. Economies are not good or else we should be seeing at least 25bps rise by now. 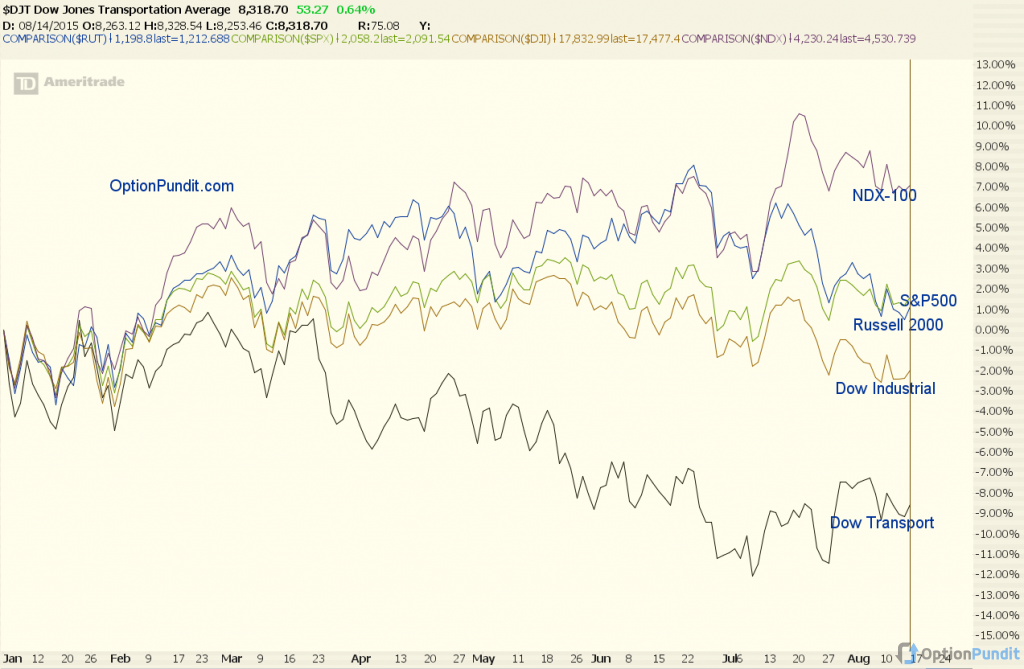 I highlighted this divergence on May 21, almost 3 months ago. Call it luck or good observation, Dow marked all time high, and since then Dow Jones has lost almost 1000 points. Now, during the past 3 months, both Transports and Industrials are in alignment.

What’s interesting though is that S&P500 seems to be holding the fort so far. And as I mentione above, on year-to-date performance basis, S&P500, Russell 2000 and Nasdaq are all up while both Dow Industrial and Dow Transports are down.

Humm! We’ll soon find out who is right?

Update on My Indicators

After extensive research, I developed 4 indicators which have guided me through lot of directional decision (and I have been sharing results on OPN discussion forum). Just like other indicators, sometime these are right while other times not. But whenever it’s right, these do deliver great profits and that’s one of reason I keep using these. As of Friday close, 3 out of 4 indicators are on sell mode and the 4th indicator is currently meaningless due to 8 months of sideways action of the stock market.

So how do I use this information? I only trade downside, not the upside!! And that’s what I see as my trading action during this week or next as long as these indicate “sell”.

Technically speaking, Dow has done enough damage so one has to be careful. Ever since recent bull leg started 4 years ago (Nov’12), now is the first times that 50day moving average is trading below 200days moving average (also known as “death cross”). 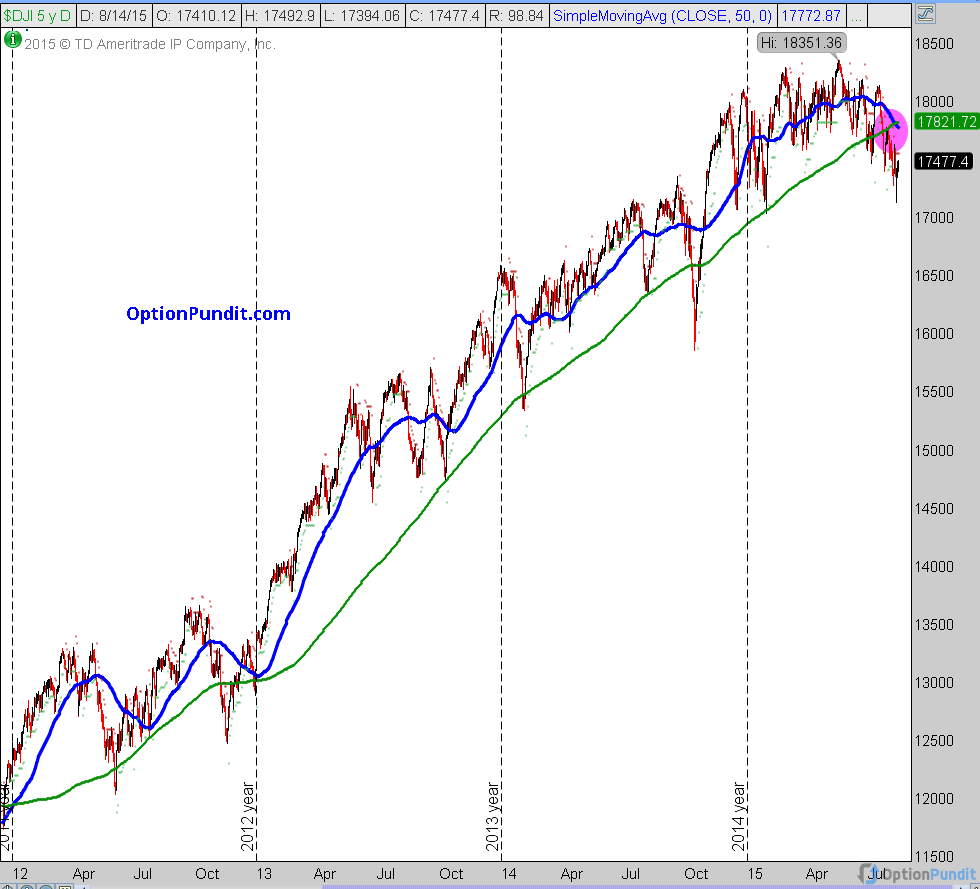 Albeit, unless 17K is taken out, I don’t think there is much to worry. It’s all play time, and we’ll focus on trades for sideways markets.

In spite of all the weakness in Dow Industrial and Transports, S&P500 has not weakened as much. So as opposed to Dow Jones, my eyes are focused on S&P500 price action as I see few concerning price patterns on S&P500.
Without going into mumbo-jumbo of price patterns, lets focus on the numbers that matter.

As a direct result of learning under him, $7000 profit during the last three months alone . My trading skills as well as results have improved significantly.

..16 years witnessing my capital being managed by different brokers....Option Pundit is well tuned with the market and exhibit option trading techniques far more sophisticated than my previous options brokers...

So, What’s the Bottom Line

A lot of people have lost lot of money trying to predict the bear market during these abnormal times since 2009. It’s been almost 4 years and markets have not suffered even a tiny 10% correction. So don’t bet your life on correction.

Trade the price action, not the forecast. If however, the weakness emerges on S&P 500 (which will be clear based on the numbers I shared above) then it’s time to be courageous and buy volatility and short S&P delta (I don’t mean VIX calls). You can construct that postion via n number of option strategies (simple one is buying plain vanilla puts). Choose the one that you are most comfortable with.

Vols are low. It’s time to dust-off your options trading skills. Best time to profit is to prepare in advance, not after.

Have fun and profitable trading, OP