What difference does a week make?

What difference does a week make?

What difference does a week make in stock markets? At times, a lot.  In fact, these days even 1 hr can make a big difference. Sharp market movements in either direction are more of norm these days. Consider this, almost 400points Dow rally within last 40mins on Oct 4th, almost 100points move during 30mins On Oct 6th; during last 5 trading session prior to Yesterday, Dow has gone up almost 1,000points. The last hr trading is back, in full swing. Now either this is due to ETFs re-balancing or due to High Frequency/Robot trading, whatever it maybe, the fact is that last 1hrs trading is really a make/or break these days. While it hasn’t been an easy market for retail traders, it didn’t spare big boys either e.g.Paulson & Co.

Though there are several newsworthy items, following 4 pieces of information will carry some weight when I am drafting plans for the near short-term trading-

Markets are still not out of the upper resistance, but purely based on MACD/RSI and Price divergences, we might be bottoming out after a fake breakdown on Oct 4th. It’s no news that markets are being driven by news (reminiscences of 2008/09), and at times due to rumors which are denied later. You can find both bearish as well as bullish arguments, but the reality is that markets are directionless. With recent rise of S&P500, VIX has dropped sharply and is about to touch bottom of the channel. Will it bounce, it remains to be seen. Taking position at such turns is always risky until unless either of the bullish or bearish argument is supported via market action, at least for short term. SPX above 1200 and VIX below 30? 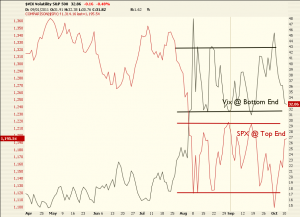 So as an investor, what can you do? How to deal with such markets?

The key is to to recognize that most market participants are nervous and markets can move in either direction. There is no clear cushion as it used to be during TARP, QE1/QE2 days and markets are prone to high volatility. During such times, it is better to aim for lower risks/lower returns i.e. play conservatively as opposed to taking unnecessary risks. If you are long, you may want to start tightening hedges when markets are at turning points. Once either direction is cleared then aim for higher risk but allocate capital properly so as not be reckless with the hard earned capital.

Market’s been there and will be there. Capital may not.