Another turbulent and volatile period! Last week started with a huge gap up rally after EU announced a $1trillion bailout package but by weekend it was a different story. Now there are questions on how solid it was. The confidence barometer, Euro, is now 4 years low and maybe even headed for $ parity as I wonder if EU will really step in to avoid Euro slide.  They should be pretty excited as EU economy may get much needed push with a weaker Euro. For OPNewsletter, we are 77% in cash. Remainder of the cash is invested across 3 income portfolio and we are nicely up +5.3% for June 2010.

May 2010 was a record month for OPNewsletter. Since the beginning of Phase-2 of OPNewsletter in Jan 2008, this was the highest % gainer. We achieved +18% gains in May 2010. This is coming on the heels of 9.7% in April 2010. We also avoided market meltdown by going into cash before pullback really started hitting hard. These results don’t include returns on speculative trades like VIX (a few times), Google, ISRG, SLGN, and many more. Euro slide didn’t come as much of surprise too, as we had started anticipating this move when 50days EMA crossed the 200EMA for the first time in 18months.

I have been covering market commentary on both OPDiscussion forum as well as on Twitter. Congratulations to all those who benefited.

There were a few trade ideas I shared in the Weekly OPN portfolio tracking; Look out for Silver (CEF, SLV). I think silver’s time is coming soon (how soon, I don’t know). Silver maybe more volatile then gold so you gotta be careful.  As usual pls do your due diligence before investing any single $$ into any stocks I/OP mention anywhere. Regarding Gold, congratulations to all those who have been permabull on this, it hit a new record high (but not quite high yet if adjusted for inflation). If you have sometime, pls do read the this link . This is a post I wrote in 2007 which I hope will provide a historical perspective of how far have we come since then. 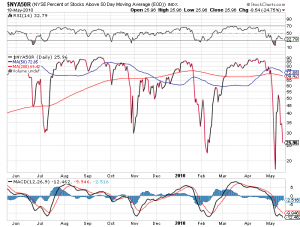 From Market perspective, Internals don’t look attractive and it seems that this pull back still has a course to run. Whether this is a full blown Market Top or just a healthy correction in the on-going primary uptrend, we’ll know only in the Hindsight.

Russell suggestion — Do your friends a favor. Tell them to “batten down the hatches” because there’s a HARD RAIN coming. Tell them to get out of debt and sell anything they can sell (and don’t need) in order to get liquid. Tell them that Richard Russell says that by the end of this year they won’t recognize the country. They’ll retort, “How the dickens does Russell know — who told him?” Tell them the stock market told him.

He is of the view that one should monitor the two Averages ($DJI and $DJT) hit “spear point” lows, Industrials at 10380.43, Transports at 4298.12 and he considers these to be of extremely importance. If both Averages hold above their May 7 lows, it will be a bullish indication; If both Averages turn down, and one Average violates its May 7 low but the other refuses to confirm, that could be a very bullish sign; If both Averages break below their May 7 lows, it will be a very bearish action, and could predict a crash (the two Averages do not have to break on the same day, but the closer in time they both violate the May 7 lows, the more authoritative and bearish the action).

Besides a 10,300 level that one should be careful about, I think hard rain is not coming until the averages drops below following levels-  Industrial at 9,835, Transports at 3,740. Though I am not an expert on Dow Theory, I would stay clear if Dow drops below $10,300 and will reposition to re-enter around 9,835 but with risk management plans in place, in case Markets drops further. If However, Dow manages to remain above 10,700, I think we might have run this pullback course; at least for now.

Thank you all the positive feedback on “Financial Freedom” article. I am glad you liked it and that it could add some value to your existing knowledge. If you are not an OPNewsletter member and would like to sign-up, pls click here to sign-up for the waitlist as OPNewsletter subscription is open via invitation only.