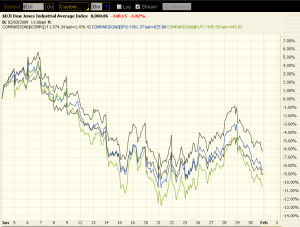 Such is the bear market, it leaves no one. Those who thought that major price indexes had successfully tested the Nov’08 market lows and that move December onwards marked a new primary bull market, were taken by surprise and Jan closed on a negative note. Dow closing almost 9% down for the month and other indices almost in the same range. I have been saying this since Nov’07 and will repeat here again “In bear markets the winner is the one who loses the least” (it’s not my quote, I borrowed it from the net and don’t know who said this, but whoever did concluded it at best)..so stay very close. I also mentioned about the importance of 7,500 break for Dow that if that’s gone, just stay clear.

Here we are, our OPNewsletter portfolio are at break even after commissions in its 1st week of opening in spite of a weak market. Saying it another way- +2.78% excluding commissions and +0.1% after commissions.This doesn’t include bonus trades like CAT and ISRG which I shared via real-time alert on InvesCafe, and entry/exit on OPN forum. I closed CAT directional trade for +25.5% and ISRG for +46.6%.

We have invested 24.27% of capital. This is also a month I didn’t open a RUT iron condor as risk/reward wasn’t good.