It’s been 5 years since markets bottomed in Mar’09; S&P500 touched 200days moving average during Nov’12 and since then it has been almost 15months for this uninterrupted move. Markets have withered all kind of storms be it weather, taper-on/taper-off tantrums, government shut down, debt ceiling and all sorts of macro-economic data good or bad. Good was/is good, bad was/is even better. Currently 200dma ties to 1730+/- just a few points shy of Feb’14 low.

Many of you have been asking>>> So how far can this run go? How High is High?

As such in current ctrl+p environment, sky is the limit! But really, Who knows and who cares as the only direction know to many is “up”. So let’s review how far this can go (besides going through the roof, if there is any?) 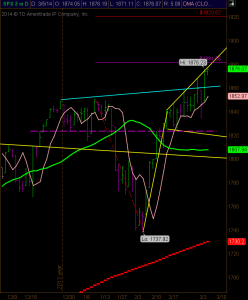 The bullish argument is that S&P might be breaking through the inverse Head & Shoulder pattern which might lead to explosive move. As per bearish argument, my eyes are spotting a broadening top at current levels, which also has an immediate resistance around $1882+/-; there are multiple negative divergences as well.

And also, worth pointing our is the fact that while all other indices are making new high, Dow Industrial and Dow Transports are still below their recent high.

So here you are, choose whichever side you are comfortable with but trade carefully.