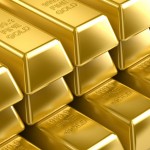 The moment I think of GOLD, something “precious” and “everlasting” immediately comes to my mind. I first started urging to buy Gold almost 3 years back when gold was around $728/ounce and it was about to make a new high. Now after 3 years, up about +70% @ at almost $1,250, does it still make a worthwhile investment or the shining metal is about to lose its glitter?

Gold is the probably the only asset class that I have written repeatedly, year after years. You may very well be aware that Gold has been in an uptrend for the past 10 years! Here is a 10 year chart- 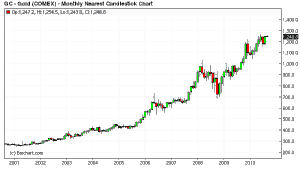 If this isn't BULL, what is?

For the past few years especially since it crossed 1,000/ounce, Gold has been widely in news. There are two camps when it comes to investing in Gold. One thinks it is in ultimate bubble, while another thinks that the 3rd phase of “Gold rush” hasn’t even started yet. It is no secret that maestro fund managers have been piling up on gold. Should we just follow them?

Let’s look at some of numbers first. According to Bloomberg-

Soros Fund Management sold 341,250 shares of the SPDR Gold Trust, the largest ETP backed by bullion, in the second quarter, according to an Aug. 16 Securities and Exchange Commission filing. That still left a holding of 5.24 million shares, equal to almost 16 tons. Soros declined to comment on the change, through a spokesman.

He says that gold as “the ultimate asset bubble” but also mentions that “buying at the start of a bubble is rational“. He owns, 16 Tons!! That’s more than 4 times of Gold reserve as held by Canada . There are many more investors who have turned to Gold including John Paulson.

Conspiracy theorists think, that given current level of Debt US is already a Banana Republic. It will be extremely difficult, if not impossible, to serve current trillions of debt. Some think that Uncle Ben wants to devalue the US$, so that US Imports get a kick, it reduces the burden, the government settles with lower value and then the US Govt back the “new” dollar by raising prices of its huge gold reserves.

Here is a question for you?

Current Market Price for GOLD  is >$1,200/ Ounce, do you know what is the official price for Gold?

The festive seasons are around the corner in India when Gold buying typically happens. China has already been on buying spree. I am personally bullish on Gold as I had been for the past 3 years. There are several ways one can invest in Gold. For instance GLD, SGOL, GDX, GDXJ, Physical Gold, Gold Saving certificates Gold Futures, etc. but whatever method you use for investing in gold, do remember that Gold is known for wild swings and can easily throw even the seasoned investors out. So if you want to participate in the Gold rally, make sure you have a risk management plan in place. A combination of option trading strategies can help you optimize your returns while providing cushion against market moves as well.

Profitable Trading, OP
OP @ InvesCafe
Disclaimer– Pls do your due diligence before making any investment decision. The above just for information purpose only.