Fantastic Four Does it Again

Fantastic Four Does it Again 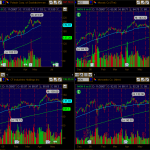 Mosaic (MOS), CF Industries (CF), Monsanto (MON) and Potash (POT) are my fantastic four of the agriculture and farming sectors. I mentioned those here and then again asked a question about a month ago, when the four were travelling earth from the sky. Whoever has the medicine to manage trading constipation did pretty damn good. And guess what, on Tuesday when crude slipped, it seemed as if these were dumped again. See today’s action and all four are flying CF up +10%, MON +5%, MOS +7% and POT +4%. Those may not sound big % gains, so look at absolute dollars, and if you are an option trader, I think you will be pleasantly surprised. POT has been my 4th biggest profit contributor of the 2008 (so far). They have a particular behaviour and in case, you are on the wrong side, these four could easily be money losing machines. That’s why I called in my last post “Hot is tough to handle, so handle carefully”. These continue to be on my watch list as long as agri and commodities business is booming. They will also be the first ones to get out any signs of “commodity bubble” bursting.

It’s beautiful if a computer modeling can help you multiply your investments, but I shall be careful. Quant Asset Management, a Singapore- based hedge fund which uses computer models to pick trades, said it plans to double the assets it manages this year after beating its peers Oh btw, The top three countries to invest in now would be the U.S., South Korea and the U.K., according to Quant’s computers, and the industries, marine transportation, general mining and exploration. Read more.

But I will not leave Vietnam behind. It has excellent potential. Read recent free economic paper from Goldman Sachs (GS) to understand more about the Potential country that could be the next Asian Tiger in the making. Be mindful this is the same Goldman sachs that coined BRIC and also told the world about N-11 so Ignore it at your peril.

Love it or hate it, it’s called WallStreet,