Paul “Psychic” octopus, or pulpo Paul, predicted Spain’s win in the worldcup dashing Germany’s hope to win even before the ball was kicked, and here you go; Spain stuns Germany to reach final. An amazingly successful forecasting record!!!

Now if only, Paul could start predicting stock market moves he will be the most expensive “forecaster” in the world and his owners the richest person on the planet earth. If only Paul could tell us when will the economies be back to 2007 level and beyond, when will Euro be out of current crisis, when will unemployment fall, when will machines starts humming at full speed again. His bottom and top picks will put many glorious Wall Street firms out of the business. 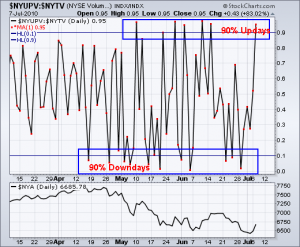 After breaking the famous Head & Shoulder Pattern that I also talked about, US Markets staged a very strong rally yesterday. The rally was supported by 90% upday. On NYSE, the volume was higher than yesterday but lower than equivalent down days. Last 90% upday was followed by 3 90% down days within a short span of time. This time, at least, short-term indicators are still in oversold state and are about to turn bullish (short term).

So the key question is- was this another fake breakout of Head & Shoulder pattern that was observed during Jun/Jul of last year? We’ll soon find out, but in the hindsight.

I haven’t changed my opinion yet. I shall change my views as the facts will change.