Before I get in to reviewing whether NOKIA LUMIA 900 will mark a turn around for NOKIA or how is LUMIA 900 vs iPhone, a brief update on OP Income Newsletter performance-

As of Thursday April 5th close,  our OP Income Newsletter Apr 2012 portfolio is up +7.3% on the maximum investment of almost 73.5% of portfolio capital. This performance is excluding gains made on directional/speculative trades. Since Mar 15th, 73.5% of $10,000 portfolio was utilized across 9 different portfolios 4 of which are already closed. Benchmarking against SPY, we are still fairly delta neutral and are positioned to benefit from any sideways movement. Our VIX Income portfolio should gain, in case there is some pullback in broader markets. If you missed out on FREE trade ideas, pls stay in touch on Twitter @OptionPundit 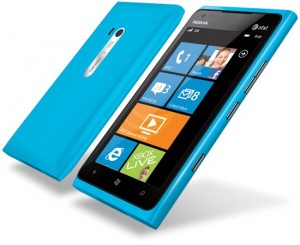 Tomorrow NOKIA (NOK) will have its, probably the biggest and most important, product launch in recent history. On April 8th, NOKIA will launch Lumia 900 in US and those who pre-ordered will get it anytime now. There are mixed reviews on the net and knowing that how mainstream now iPhone is (in smartphone category), the reviews in my opinion are not to bad which is actually a good thing for Nokia. Any lifestyle product is open for subjectivity so no one is really right or wrong. One of the most hyped issue is “lack of apps”.

Moving on to what lies ahead for NOKIA (NOK), Here is what I think about NOKIA Lumia 900 per-se-

So all things aside, once you get a 10 on #1, it’s really number #3 that will matter most and when numbers are out, we’ll see how big or small was a deal. However, in the meanwhile, those are madly in love AAPL and see nothing but apple and know nothing about NOKIA, here is a historical price chart of both the companies, since 1997. 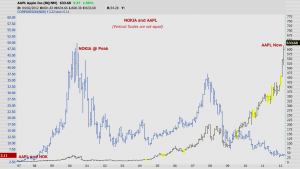 The objective of this chart is not to predict that AAPL is now at peak (and I don’t think that even after $500 billion marketcap it’s overly priced even on fundamental basis, but that’s for some other day) but to show that when AAPL was not known, NOKIA was big and used to sell at premium. Today, at $5billion free cash flow and roughly 5% dividen yield, NOK is priced at 1/2 of last years sales, 1.2x book value and roughly 13x forward earnings. If NOK could just stop the decline, that itself has potential to double the share price from current level. Will this change with Lumia’s launch? I think yes, but let’s wait for a few months to allow numbers do the talking.

What is your first reaction? what’s your gut-feel?