Whiting Petroleum Corporation (NYSE: WLL)  yesterday announced that its Board of Directors declared a 2-for-1 split of Whiting’s common stock to be effected through a stock dividend. According to the news- “Stockholders of record at the close of business on February 7, 2011 will be entitled to receive one additional share of Whiting common stock for each share of common stock owned as of that date. Whiting anticipates that the additional shares of common stock to be issued as a result of the stock dividend will be issued in book-entry form on or about February 21, 2011.”

Originally I wanted to share this trade idea yesterday when WLL was bouncing of it’s 50days moving average but couldn’t as I spent time on NFLX earnings instead. In any case, I think WLL still offers a good opportunity due to this event. Firstly for those who don’t know WLL, here is a brief description from Google Finance-

Whiting Petroleum Corporation is an independent oil and gas company. The Company is engaged in acquisition, development, exploitation, production and exploration activities primarily in the Permian Basin, Rocky Mountains, Mid-Continent, Gulf Coast and Michigan regions of the United States. During the year ended December 31, 2009, the Company’s average daily production was 55.5 thousands of barrels of oil equivalent/day (MBOE/d). As of December 31, 2009, its estimated proved reserves totaled 275 million barrels of oil equivalent (MMBOE). The Company’s Permian Basin operations include assets in Texas and New Mexico. As of December 31, 2009, the Permian Basin region contributed 123.3 MMBOE of estimated proved reserves to its portfolio of operations, which represented 45% of its total estimated proved reserves and contributed 11.7 MBOE/d of average daily production in December 2009.

So how to play WLL stock split announcement via Options–

The Basic concept is that stocks usually trends up leading into the split day and it is so because many investors/traders think that stock split is a sign of confidence; and since majority follows it, it also serves as a self-fulfilling prophecy. Of course not all the stocks that announce split goes up, so one has to be selective in choosing to play this “potential uptrend”  that might last for a few weeks. And I think WLL maybe one of those that might rise. Attached below is a 1 year chart for WLL. 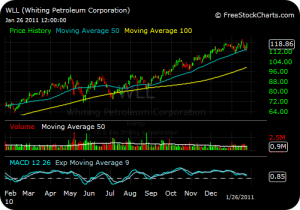 A Bull call debit spread or a Bull Put vertical credit spread good be one of the ways to play a potential uptrend. I am personally of the opinion to sell to open a Feb 115/110 Bull Put Vertical spread. As of yesterday close, this spread will bring $1.17 credit and thus $3.83 on Margin. By Feb’11 expiration, if WLL stays above $115, it may generate 30%  returns x-commissions. The Break-even for this trade will be $113.83 (=$115-$1.17) below which the trade will start to lose money and will lose 100% by Feb expiration if either a) it is not adjusted or b) not taken off for a loss. I usually prefer to book profit/loss at 15-18%. Here is the risk reward chart for the trade-

This is a Theta positive, negative vega trade. Once it’s set, you can leave it but monitor for stock movement. As long as stock isn’t trading below $115, the trade will be fine.  30% for less than 4 wks (assuming WLL is above $115 by Feb expiration) is an excellent risk/reward for a limited risk strategy. Just make sure that you have a risk management plan in place should WLL move against your position. For a starter, one of the simple adjustment plan is to open a Bear Call spread and convert into a fly as soon as you are feeling uncomfortable with the position.

Disclaimer– As of this writing, I don’t have any positions in WLL, but I may open anytime. I may open either any of the strategies discussed above or a different one. I may also change my opinion anytime. Pls do proper due diligence before investing even a single $.