Where is NIFTY (NSEI) Headed?

Where is NIFTY (NSEI) Headed?

Where is NIFTY (S&P CNX NIFTY NSEI) headed? Well, no one has that answers else they wouldn’t be trading. It’s all about “What ifs” and probability of those likelihoods. This post tries to paint what are the possible outcomes in the short run and how could you trade those?

Where is it headed now? If we use these retracements as guiding light, we might expect NIFTY to bounce upto 5,940 (or lower) or so before any meaning downleg starts. 5,700 needs to be defended. If not, NIFTY might soon visit 5,500 that needs to be absolutely defended or else we might see another sharp down leg.

Since then it hasn’t gone anywhere meaningfully and still trading range bound. Sure there were some sharp corrections but all the action of past 6months was confined pretty much into 700-800 points i.e. 5,200 to 5,900. So where are we now?

So let’s revisit NIFTY for developing some short term scenarios. Based on the chart attached, focus on Red/Green lines that define a congestion and indecision area. 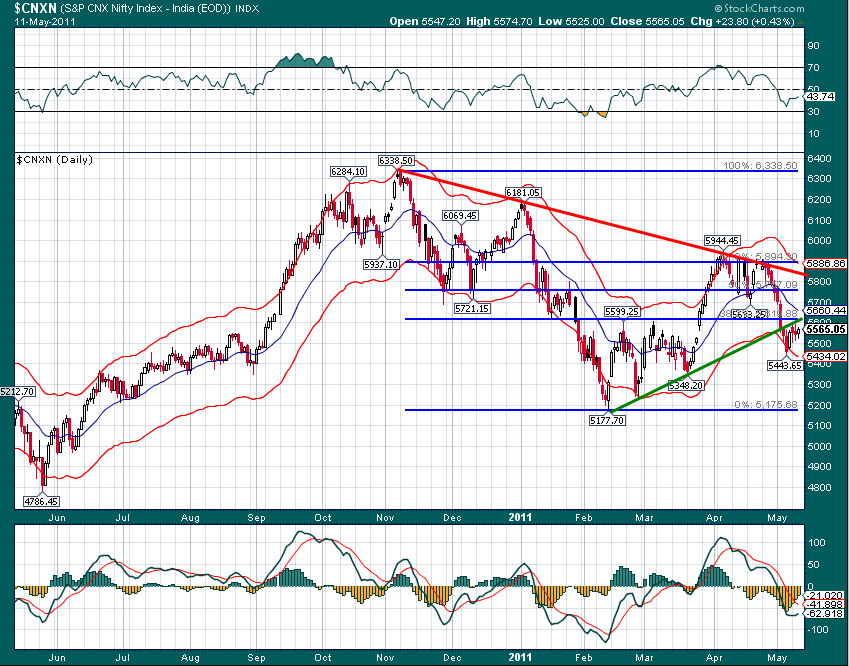 The subsequent peaks since Nov’10 were lower but the lows were higher. However, recently NIFTY has broken the supporting trend line (green) which is not an encouraging sign. So if I were to define a possible range to trade, that’s going to be 5620-5660 on the upper side and 5430-5400 on the lower side from a short term perspective. This assumes “normal” market behaviors. Unless those points are taken out/breached, I don’t think any meaningful trend will develop. As a risk hedged trader, my downside risk protection will be around 5,200 followed by 4,900.

Here are some ETFs that you may want to look at INP, EPI, PIN, IFN in case you want to trade India. If you are located in India, then you could trade NIFTY options which is fairly liquid. LEAPS aren’t that liquid though.