Warning: Creating default object from empty value in /home/customer/www/optionpundit.net/public_html/wp-content/themes/salient/nectar/redux-framework/ReduxCore/inc/class.redux_filesystem.php on line 29
 Where are the Markets Heading? - Learn to Trade Options | #1 Options Trading Education

Where are the Markets Heading?

Where are the Markets Heading?

Below charts and rough technical analysis is not to paint a grim picture but is rather an attempt to define a range for the downside. It’s better to develop trading plans with the worst case scenario in mind vs. developing plans on pure hopes and dreams. I don’t argue that equities are starting to show value and in fact I am already working to develop an OPN value portfolio design to double in next 5-6 years riding on the trends that are about to emerge in the new world post financial crisis clean-up. I think no one can time the market, certainly not me, and hence I shall also share how to fully hedge this portfolio so as to avoid any further losses should the market decline even further. More on that later. 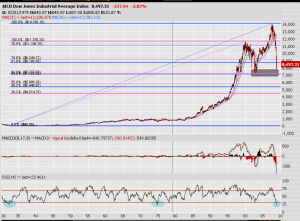 This is real long term picture of the Dow Jones industrial. For an ultimate bull market that started from the lows witnessed in the great depression. This monthly charts depicts a dow starting from 42.30 in 1930s to the high of 14,198 in the late 2007. My interpretation in an extremely simple way is that, assuming Oct intra day low is gone, 7,200 (+/- 200 points) is a very strong support. If that’s gone, we are talking all the way back to near 6,000 and followed by 5,400. And by that time, the DOW will be yielding roughly 6%. It is not a coincidence that 2002 low halted decline at around those levels. These points were another strong fib support points. Pls see the shaded region.

MACD is in the most deeply oversold region, ever!! RSI is not too far either which is almost at the levels recorded in 1932s or late 74. Though, these indicators present a bullish scenario, be mindful that these can remain oversold longer than I, as an individual investor, can remain solvent and of course these can also clear oversold level within that bear market. 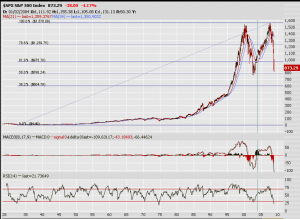 Attached chart is for S&P500 Index. The picture is almost exact replica of the Dow industrial. 2002 lows were great fib support points and if translated into current market environment, it seems 790 will be a very strong support followed by 600. In past few weeks we have already seen that the moment S&P500 touches 800, it has bounce back very aggressively. Now that may be driven by program trading, but who knows. We might be heading for 604 that will yield almost 6% classic at which point equities are very attractive (oh some of those are already attractive selling at crazy prices!). From MACD and RSI standpoint is almost the same story as Dow.

Nasdaq is in a different league and I can’t conclude with it’s charts except a few generic comments.

So moving forward, how to interpret this. I may very well be wrong, but I think we are not yet done with the selling. The only positive point so far I have seen is that lows have been on decresing volumes vs preceeding low (in past 6wks). A high volume up day was soon wiped-out by major down days. So first level seems Oct 10 intrday day, followed by 2002s lows and finally the points I mentioned above. However, if there is upside from here onwards, supported by strong volumes and improvement in breadth etc, I might consider reversal but till then, I am not covinced with any rallies.

Many are calling it is a bottom. I’ll prefer to be naive and just be guided by the market action while keeping the big picture in mind.

We have started opening Dec income portfolios for OPNewsletter. If you would like to join, pls click here.