Where are Markets Heading?

Where are Markets Heading?

No one has an answer to this question. In August, the market fell nearly 5%, as rising fears of a double dip and of a repeat of 1930s-style deflation, spooked investors and sparked heavy selling. But instead of a continued negativity in September — historically the worst month for stocks — it turned out to be a record September in over 70 years as S&P  jumped almost 9%.  And while markets were rallying in Sept, VIX, remained almost flat (25-23 range). Talk about “unusual uncertain” times!

To take advantage of intrad day movements and to keep OP readers updated real time, I have been using Twitter/InvesCafe. I am glad to share that some of OP followers have been able to reap nice benefits. It is FREE, check out my profile on InvesCafe and you may review past short term speculative trades as well. You may want to follow my real-time updates for free trade ideas, market outlook and commentary. This will be now even be more useful than ever, as earnings season kicks-in from today.

So has anything changed in Markets significantly? Nope. Some industry veterans gone to the extent saying that US won’t even recognize itself by the end of year; while others saying Dow going below 1,000. As I have been mentioning for several months now, nothing significant will happen unless markets break-out from the trading range i.e. 1,230 and 1,000 for the S&P500. A 3 years chart below shows you the zone markets have been trading almost for a year. 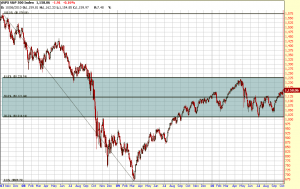 While 200 points may seem like a lot, we also saw markets dropping by a significantly amount from the Oct 2007 top. Unless either point of this range is broken, the “unusual uncertain” market will continue and a “Trading in the Zone” isn’t unusual for the stock markets.

A few days back I mentioned The Gartley 222 Pattern and shared patterns to watch for both Dow and S&P500. Both S&P and Dow are pretty much following that scripted story. Now let me share a few more concerns I have currently- 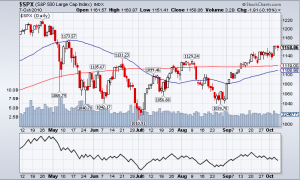 Bottomline– Trends takes time to develop and above represents just a few of many things forming macro perspectives. There is lot more that goes into financial markets which we usually come to know, if at all, only after it has happened. This doesn’t mean markets will tumble tomorrow and this also doesn’t mean that I am a bear and shorting the markets. I have my opinions but I love making money from markets. So, I shall continue to trade options as usual but I would avoid going long on equity at least till the elections are over.