Searching for profit opportunities in a single market can be a worthy task when payoffs match the effort required.  However, there are moments when knowledge of parallel markets may provide multiples of normal return expectations if a trader is nimble enough to plan ahead and understand the market dynamics involved.  Options traders that focus on stocks and commodities may also want to include currency options in their mix when forex carry-trade volume unwinds.

There is nothing quite like a predictable trend that takes months to conclude and an option strategy that rides the curve in the money.  The recent debt crisis in Europe showcased these dynamics for all to see, and the alert trader was prepared with a ready-made execution strategy to profit from capital fleeing to “safe havens” and exiting high-growth country markets.  Even though a crisis is unpredictable by nature, the disruption of the forex market is very predictable and generally takes months to find equilibrium.

A “carry trade” is defined as:

“A strategy in which an investor sells a certain currency with a relatively low interest rate and uses the funds to purchase a different currency yielding a higher interest rate.  A trader using this strategy attempts to capture the difference between the rates, which can often be substantial, depending on the amount of leverage used.”

The big risk in a carry trade is the uncertainty of exchange rates.  These transactions tend to involve leverage (borrowing from the broker), such that a small movement in an exchange rate can translate to huge losses unless the position is hedged appropriately. 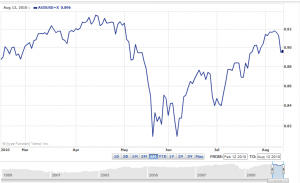 Let’s focus for the moment on the “AUD/USD” currency pair.  Australia has managed to skirt the global recession that has affected economies in most developed countries.  Growth and interest rates have risen as the Aussie Dollar has strengthened versus our Dollar over the past four years.  The “dip” in May and the subsequent “bounce back” in the months to follow are typical of unwinding “carry trades”.

Large global banks, hedge funds and individual investors borrow in low interest markets like the United States and then invest where rates and growth are predictably higher.  This time around, investments went in to Australia, New Zealand and even India.  The crisis in May drove risk-averse investors around the globe to buy Treasury Bills, thus strengthening the “USD” and causing carry-trade volume to be unwound.  After the crisis, actual fundamentals produced the predictable “bounce back”.

The advice for option traders is to prepare in advance for impending crises that disrupt currency markets.  They are not as rare as they might seem during these times of market uncertainty.  Bad news will cause capital to flee to the U.S. Dollar.  Countries with strong economies, liquid currencies and higher interest rates are your targets.  Prepare to go long on the respective currency options after a bottom is reached, and count your profits all the way to the bank.  Forex can be high risk, but options limit your risk to the premiums paid.

(Pls do your due diligence before making any investment decision. This guest post has been contributed by Mr Vincenzo Desroches for educational purposes. Mr. Vicenzo is currently writing a small business book while continuing his exploration of economics together with all of his prodigious interests. To know more about him, pls click to follow Vincenzo @ Invescafe)