This Time is Different?

This Time is Different?

In order to share current market conditions, I borrowed this title from an excellent book “This Time Is Different: Eight Centuries of Financial Folly by Kenneth Rogoff and Carmen M Reinhart”. If you haven’t read it, I shall suggest that you get a copy and read it.

Let’s get to the business. If by June 30th, Dow can’t close above 10,130 this will be the 2nd consecutive month of downward move by Dow for the first time since March’09 bottom. Well, so what?

Before recent pullback begun, I drew a chart on NDX (Nasdaq-100). In this chart I drew a “potential” head & shoulder top pattern expecting NDX to move upto 1929 and then start to retrace (If right shoulder were to develop) and potentially touch Feb low before or by July 2010. I also shared a modified version of this chart with OPNewsletter subscriber on June 22. Well, so far NDX has retraced almost 100 points and one of our speculative trade (NDX Jul 1700/1750/1800 Put butterfly has yielded roughly +100%). The chart below was drawn after June 16th close.

The point is not about blowing my own trumpet to say our trade worked out fine, but to share with you about a potential dangerous situation that might be developing in the markets.

There was a head & shoulder pattern in May-Jul last year spanning across 2.5 months covering about 600 Dow points. The support level was around 8,240 for Dow. It broke the floor but it turned out to be a “fake” H&S breakout (hindsight bias). We have another H&S pattern developing now. You may argue, so what, the current one may turn out to be the same? 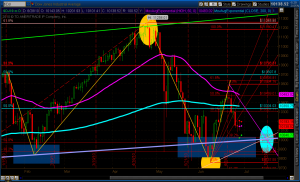 I don’t think there is anything else to forecast or write about except that we need to be careful. You might have noticed my cautionary tone beginning Mid April when I started saying that market requires caution and Little Johnny’s are coming to the market who are usually late comers to the party.

Neither I am not a doom’s day forecaster nor a euphoric optimistic. No hard rain is coming until unless all major indices fall and close below Feb lows. I am glad that I have suggested OPN subscribers to be out of stocks when Dow dropped below 10.3 for first time (or check my twitter streams).

Bottomline –It’s your money. Take care and trade carefully. There is no need to take unnecessary risk. When bear attacks, panic reigns, screen freezes, decision making chokes. Financial freedom is not about being invested all the time or just buy and hold (at least I don’t think that way). Cash has it own wonderful returns that allows to buy when things are cheap. Check here what does financial freedom means. Let Mr Market do the talking and show the way. I am still watching the Feb lows before concluding anything else.