The Gartley Pattern on Dow and S&P500

The Gartley Pattern on Dow and S&P500

Gold is making waves, a new record high in terms of US$; I hope you read my earlier post on Sept 2 (Going for Gold)and benefited from the move.

Recently I attended a talk in an investment club where one of my friends presented an interesting perspective about The Gartely 222 Chart Patterns and his forecast for the coming few weeks. As this was in line with what I was thinking so I thought why not share it broadly. The Gartley pattern was outlined by H.M. Gartley in his book Profits in the Stock Market, published in 1935 on page 222. Although the pattern is named “The Gartley Pattern” , Fibonacci retracements were not discussed in the book, with regards to this pattern!

The attached shows an uptrend XA with a price reversal at A. Using Fibonacci ratios, the retracement AB should be 61.8% of the price range A minus X, as shown by line XB. At B, the price reverses again. Ideally, retracement BC should be between 61.8% and 78.6% of the AB price range, not the length of the lines, and is shown along the line AC. At C, the price again reverses with retracement CD between 127% and 161.8% of the range BC and is shown along the line BD. Price D is the point to buy/sell (bullish/bearish Gartley pattern) as the price is about to increase/decrease.

Though there are many variations to ratios, the Fibonacci retracements that yield good results are the 61.8% at the B point and the 78.6% at the D point. The pattern should exhibit a distinct AB=CD pattern that converges in the same area as the 78.6% XA retracement and the BC projection (either 1.27 or 1.618). The most critical aspect of the Gartley is the B point retracement, which must be at a 0.618 of the XA leg.

Currently both Dow and S&P 500 are in the process of forming the classic Gartley 222 Pattern. Whether or not it will be completed and follow the reversal it is yet to be seen. I am not a fully technical analysis trader but I do like to use it as one of the tools while making key investment decisions since a majority of traders around the world use it (which might hence call for benefiting from “self-fulfilling prophecy” type of trading). 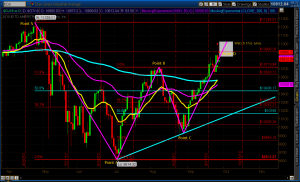 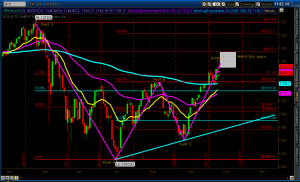 The above chart provides details about S&P500 in relation to The Gartely Pattern.

So what’s the bottom-line: Just like previous Head & Should pattern, this might work out to be a fake pattern as well. However, I am going to watch current market move and will be willing to take bearish positions starting mid next week. There is nothing certain in the markets so I’ll be cautious and hence my stop loss will be placed above April highs.

Disclaimer– Pls do your due diligence before investing any single $$ on the trades mentioned here. These are just for information.