The Dollar is Weak, Says Who?

The Dollar is Weak, Says Who?

With so many variables, e.g. quantitative easing, huge debt load etc, one would think dollar should be ruined by now; isn’t it? Not at least if you go by the USD index which is measured against a basket of currencies.

Look at the chart below; after forming a bottom between Apr/Jul 2008, Dollar experienced a sharp rally (supported by probably a short squeeze as well), then fall again towards the end of 08 to rise again, then we saw another bottom (which was a “higher low” in Nov’09) and since then dollar is on the rise. It’s pretty much at the similar levels where it was in Jul 07. In fact it has just broken the upper resistance and weekly MACD is just rising through the zero line. 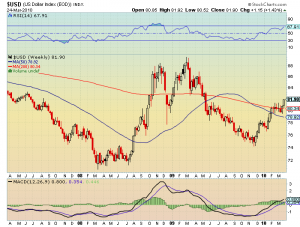 Why I chose only 3 years period; because this is the period during which record deficits, exponential growth in US debt and significant increase in liquidity has been observed. The media has been packed with all “Dollar is doomed” types and guess what? In spite of all what has happened, dollar hasn’t been that weak in terms of other currencies as it was widely supposed to. One may offer counter arguments of Euro crisis etc but at the end of the day, dollar is where it was roughly 3 years back when measured via USD index.

But is that all? There is one mighty force; the force that has been tested time and again, and it has been shining throughout the history of mankind. What about Dollar with respect to Gold, the ultimate currency? Even though action of past 2 years can be termed as volatile (or call is Giant “Head & Shoulder” whichever you prefer), the conclusion is simple and obvious; USD has been weakening against gold. 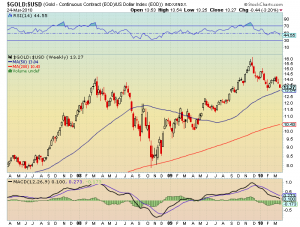 Dollar has been weakening, says who? Gold.