March’09 portfolios were closed +8.8% (excluding commissions) and +5.6% (including commissions). I used up about +46.7% of the assumed 10K capital for OPNewsletter. This result doesn’t include excellent results from bonus trade alerts. 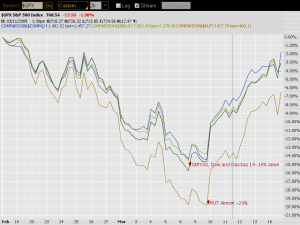 When compared with broader markets, this was probably one of the best months for OPNewsletter. Look at the major market movements since we opened the Mar (Mid Feb’09) portfolio. RUT traveled almost -20% south; and DOW, S&P500 and Nasdaq ranging from -14% to -16%. All this was followed by sharp snap back rallies. Isn’t this amazing, almost 20% back and forth move in one month. I have not researched to find if this is one of its kinds or has happened before. But whatever be case, this is not income trader’s best friend. This was surely not an easy period. In fact one of the toughest and most volatile periods, at least of my lifetime (leaving aside Oct 1987 crash). Hence preserving capital and delivering just positive results itself is good enough. One of the strategy I used was to focus only what was opened and keep cash free to make adjustments as needed. This served nicely without really triggering panic due to shortage of capital. For Option Trading Strategies, We used multiple strategies i.e. Calendars, Credit Spreads, Digonal Spreads and so on. I however, decided not to open an Iron Condor this month anticipating extreme movements which also served nicely (There is not a single losing Iron Condor since re-opening of OPNewsletter).

For OPNewsletter, The best performing portfolio was USO which delivered +22.8% and it was also rolled over to Apr. I expect this portfolio to deliver +50% by July. The worst portfolio was ABT which was almost break-even (+0.89%). MCD delivered +5.5%. A tough month though, it required greek’s analysis, technical analysis, gut feel and past experiences with similar situation (VISA, May 2008) helped sail through this month.

We are nicely positioned for Apr’09 portfolios as well and so far invested only +19.7% of assumed 10K capital. I shall be opening a few more portfolios next week, if you would like to join, pls sign-up for the OPN waitlist.

Those who could trade intra-day, markets offered wonderful trading opportunities, specially on the Expiration day. A smiling butterfly was shared with all the free members as well, that resulted into >+100% gains. Hope folks who followed invescafe/speculative trade alerts (some of those listed above), probably had some good opportunities that I played for intraday trades.

(You may want to sign-up for the Basic Membership (Free until Dec 2009) that I use to share free trade alerts for registered members).

I have been experimenting with several underlying/strategy combos over past 3-4 months, with real money. I think I am ready for opening new Portfolios/newsletter(s) to take advantage from current environment. I shall share more on this later.

One final message, markets are not out of woods yet, pls don’t let complacency set-in, these are extraordinary time and it requires one to be taking extraordinary steps.