Costco (COST) is down almost $5 since I last shared a FREE trade idea together with a simple trading strategy, those COST puts, easily hit the profit target identified in the post and if measured point to point, are now up +70%.  NFLX bearish trade resulted into nice gains within a day of my posting bearish NFLX trade idea on Twitter for free as NFLX dropped almost $12 by the next day. Apple computer (AAPL) lost almost $11 since another free AAPL trade idea I posted on Twitter (during WWDC). This was a strategy we have been following for past 6 years. That’s for directional trade. Our majority of capital lies in income trading. For OPNewsletter Income Portfolios, we are up over +10% while Markets been down almost for 5 weeks. OPN Jul’11 portfolios are up also up +1.7% while we are still opening new trades.

Markets have been declining for the past 5 weeks and during this time a lot of buzz has been generated on just how much economy has deteriorated and/or whether or not QE3 is on its way. It’s natural, when the markets are decidedly higher, you’ll hear mostly the good stuff. However, when markets are pulling back, bears’ voice gets stronger and stronger. All said and done, keep in mind that major markets haven’t yet pulled back even 10%!!!

Yes, there are some serious issues with the economy and last week’s poor macro-economic data provided us a glimpse of just how bad things are. Besides, the QE2 will also be over this month and which naturally raises the question what’s after QE2? Is there a QE3? If it is, so far market isn’t pricing it. Well, it may not, because economy/markets need to look very gloomy before Uncle Ben can secure any alignments relatively faster. And this will also trigger a debate on how successful QE2 was. Here is an excellent post published on ZeroHedge that I shall encourage you to read to better understand QE’s performance in a simple yet powerful way.

As I mentioned in Nov, it’s the jobs that matters and people will not spend money unless there is a “Permanent wealth effect”; or at least “perceived” wealth effect. Here we are. Personally I don’t think QE2 succeeded but well, who cares!! Maybe someone will. Broader market’s reaction from the past 5 sessions isn’t encouraging either. There were two 90% down days. Usually a 90% down day is followed by 2-5 days of technical rally, but so far there hasn’t been a single technical rebound yet. In fact, there hasn’t been a single 90% up day since Dec1, 2010!!! 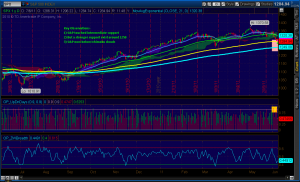 So where are we heading? One immediate level that is clearly visible is Mar’11 lows. For S&P500 that is 1250; for Dow 11550-11600, for NDX that 2200 and for RUT 790. RUT is pretty close to those levels. Regardless of those levels holding or not, I might take few speculative bullish trades at those levels with a clear stop loss (mental) targets. Heads, I win; Tails, I don’t lose much.