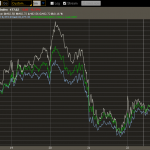 This 2nd leg of rally since early May has been characterized by thin volumes. The volume is increasing on the down days and reducing on the up days, showing signs of increasing market fatigue and probably some degree of further market weakness could be ahead. Will a limited correction be followed by another attempt at new rally highs? Or, is it possible that a decline back to the March lows, or below, could occur in the weeks or months ahead? As Market Veteran Richard Russell of Dow Theory says- “Dollar down, bonds down, gold up, it all fits together — trouble.”