Warning: Creating default object from empty value in /home/customer/www/optionpundit.net/public_html/wp-content/themes/salient/nectar/redux-framework/ReduxCore/inc/class.redux_filesystem.php on line 29
 Is the Correction Over? - Learn to Trade Options | #1 Options Trading Education

Is the Correction Over?

Is the Correction Over?

Is this correction over? Probably a trillion dollar question that is going through everybody’s mind! The irony is that whoever has the crystal ball to answer this, probably doesn’t even need to answer this as he/she must have already achieved the market nirvana. Rest of us can only try or guess.

Let me share my two cents on where we are.

First, if we assume that stock market is a leading indicator, then it is already projecting tough economic environment ahead. Does that mean are we going to see a double dip recession? Here is what one of my favorite analysts, John Hussman, thinks. (Below is just a snapshot, I shall encourage you to read more by clicking here)-

The following is our refined set of “Aunt Minnie” criteria for identifying oncoming recessions. See the November 12, 2007 comment Expecting a Recession for details. In every instance we’ve observed these conditions, the U.S. economy has either already been in a recession, or has been within a few weeks of what turned out in hindsight to be the official beginning of a recession. There have been no false signals.

For all intents and purposes, unless the credit spreads, the S&P 500, or the yield curve reverse, a further decline in the Purchasing Managers Index to 54 or below would be sufficient to confirm a “double-dip recession.” Note that by itself, such a level might not be particularly troublesome. But in concert with the other evidence we observe, it would be sufficient to complete the syndrome of risk factors.

So if I were to draw my conclusions then probability of double dip is more than “no 2nd dip”. For skeptics, the answer maybe, this might be just another one of those 10% corrections which typically occurs in a bull market. Well, maybe not so this time especially when you read this–

According to Bespoke Investment Group, there have been 58 “corrections” of 10% or more in the Standard & Poor’s 500 since 1927. In 33 cases, the corrections stopped short of the 20% bear market threshold and the market went on to higher highs, while 25 times they grew into a full-grown grizzly.
But in the 32 instances when the market has dropped as much as this one has the outcome has been heavily weighted to the losing side. Only seven times drops of that size stopped short of the 20% bear mark. In the 25 other times the decline extended to 20%, the average bear market decline was 35.5%.
Over a period of time, I have observed that stock market is about probability and then risk management to adjust to those probabilities.

Since Apr 26th top (Assuming it was) we have observed thirteen 90% volume days. It is the most number of 90% days (for a similar period) since the Mar’09 uptrend begun. It had total of 8 90% down days and 5 90% up days. The severity of extreme action clearly shows that this correction is different from the previous corrections of this uptrend. 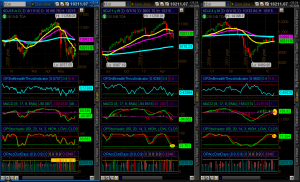 On daily charts, MACD, Stochastic and my breadth indicators are pointing upwards more so because of a technical oversold state. However, don’t forget monthly and weekly pictures. It is not oversold on a weekly basis and if June turns out to be a down month, then monthly stochastic will probably trigger a sell signal.

Bottomline – The coming week is going to be an interesting one as markets halted their advances near short term resistance levels. As I have been sharing for a while, pls be careful and don’t over trade. At best, market action is mixed with one thing relatively obvious. The upside is not great here, downside is; so be on guard for your capital. Bullish, Bearish everything is in the hindsight (except in the extreme cases); the “reality” and the “present” is “trading capital”. If there is no capital, both bull and bear are useless. So read whichever news source you like, conclude whatever you like but one thing is sure, before sky falls, markets have to close below Feb lows.