Warning: Creating default object from empty value in /home/customer/www/optionpundit.net/public_html/wp-content/themes/salient/nectar/redux-framework/ReduxCore/inc/class.redux_filesystem.php on line 29
 Is it The Time to be Bullish? - Learn to Trade Options | #1 Options Trading Education

Is it The Time to be Bullish?

Is it The Time to be Bullish?

I mentioned that I won’t go long until S&P can close above $1,344. Yesterday, S&P close comfortable above 1,344. Additionally, there was another bullish signal based upon Dow Theory i.e. both Dow Industrial and Dow Transport closed at new high since Mar’09 bottom. So the market might be entering into another bull leg, probably the last leg before it gets back to where it was in 2007.

So am I turning bullish now? Lets understand the context first concluding anything.

So, it seems all is clear for Bulls now. Fed told nothing, answered everything and provided absolutely clarity i.e. “Status Quo”. Interesting. A status quo means, same as it was; we are conceptually in the same position as in 2008/09. Why? Simple, nothing is being reversed, pretty much all the meaningful actions Fed took during the crisis are still in place. It’s a different story that ZIRP was required when a) economy was in extreme crisis and b) outlook was grim. It was a set of  tools that were used for an exceptional circumstance. But if Fed continues to use the same tools without any indications whatsoever to stop using it, than it implies to me, in plain simple words, situation is as bad as it was, if not worsening.

Maybe the green shoots are just a “feel good” factor. Beneath the surface though the shoots might be rotten. Consumers are running away, unemployment is still high, US$ is making newer lows, food and energy prices are sky rocketing which might be “transitory” but as an individual I need to feed family and drive “today” not in future. None of this tells me there is “wealth effect”!

OK that’s all subjective. Maybe I am including emotions here. Let’s then get down to some key numbers? 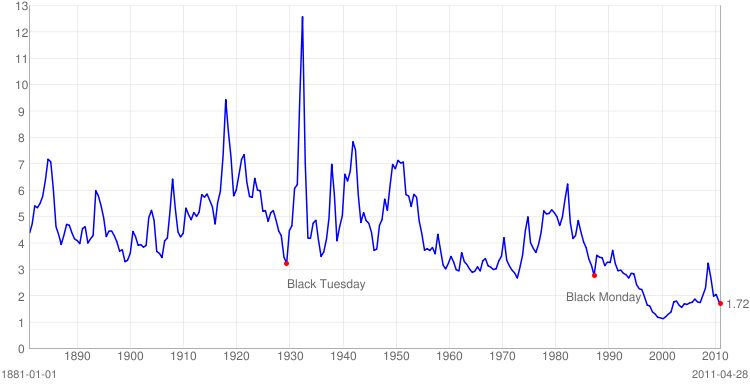 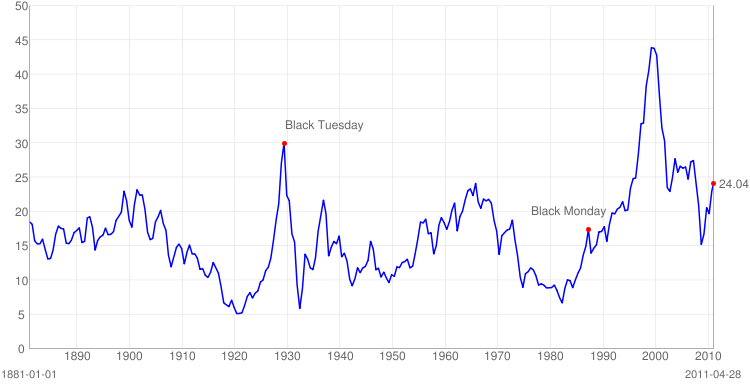 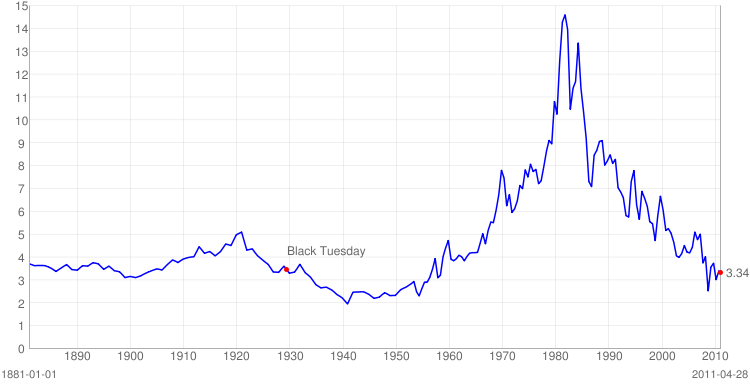 10 year Tresury Yield: At 3.34%,  there is tremendous pressure on yield to rise. It’s artificially low as Fed is the biggest buyer. Though there is historical precedence that yield can go even lower, numerically, but as of now, there is no answer to the question “Who will buy after Fed is done with QE2?” Given the way dollar is sinking everyday, who would like to invest in a depreciating asset for paltry yields?

To understand more about the valuations, read a bit more about “anatomy of a bubble” by one of my favorite economists, John Hussman. There are tons of other macroeconomic data that one can look for. I just want to look at the big picture and assess my confidence level. I know all these rich valuations can be brushed aside if earnings (and dividend) will continue to grow. But given current state of economy, I doubt earnings will grow sufficiently to justify these rich valuations. Else Uncle Ben would have been more confident to say “something” vs “nothing”.

So, am I going ahead with a bullish, long positions?

NO! I am just not comfortable with it. I have not yet experienced the “wealth effect”, I still don’t see Uncle Ben Confident enough to speak truth and I still don’t find an answer to Caroline’s question “What if  Bernanke is wrong”? The upside is limited.

Bottomline – It’s my money.  From this point onwards, historical statistics are not favourable, there is no sign that disease, that caused severe financial crisis, has been cured. However, one thing I know for sure i.e. “What if I am wrong by being bullish”, the consequences will not be pleasing as I am not too big to fail. For the time being, I am happy continuing with OPNewsletter style, >13% returns for the May 2011 expiration alone is more than enough to counter the $ demise + Yield on Tresuries.