Even though markets closed in positive territory on Thursday, down volume was 52% of up + down volume. There were 16 new 52 Wks high while 82 were at new 52wks low. On NYSE 1377 stocks advanced and 1682 issues declined. During after hrs, RIMM announced poor set of results and the stock was down 14%. Have a look at the chart below and observe how dominating down volume has been so far. Not a single 90% upday while FOUR 90% down day in as many weeks!!! NYSE has experienced a slow grind with significant distribution during the past several weeks. But guess what, markets still have not pulled back by 10%. 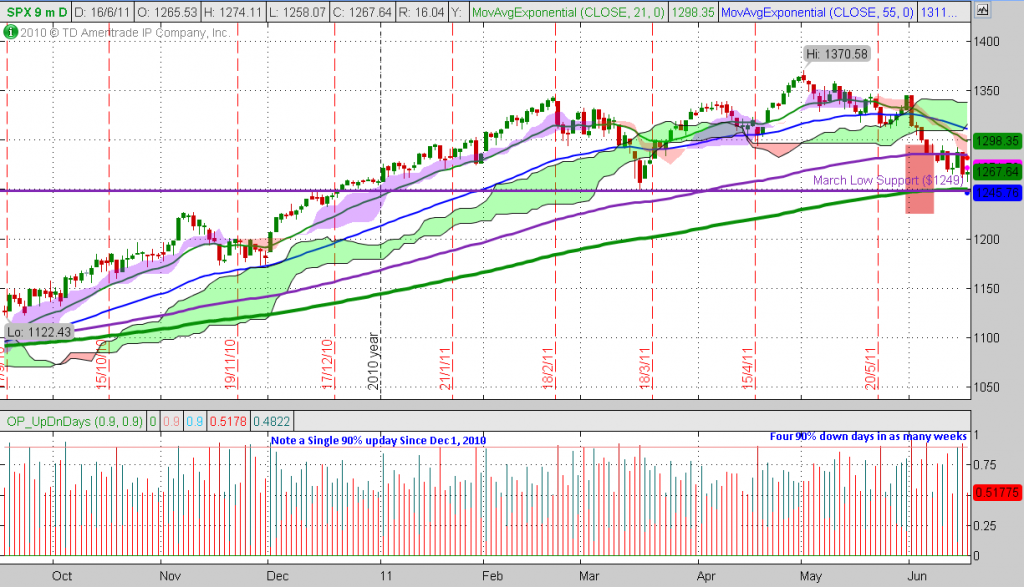 So, major markets’ been down for 6weeks in a row and both S&P500 and Nasdaq-100 are down for the 7th week as well. Well, Friday is still there and we might conclude this a positive week after market opens. Does it mean, markets have found a bottom? Or is it just a pause before new down leg begins? Let’s explore a few key charts before concluding anything.

As of Thursday close, only 51.6% of all the stocks that are trading on NYSE are in the bullish trend. That’s a far cry from 80% during the early 2011.

So what all of this means for coming few weeks? Bottom-line, at this point, the likelihood of a bounce are much higher than the likelihood of going down. Nothing certain, so how do you trade? Trade it with options that may allow you to be wrong, correct mistakes in time and still make money. For instance, you may choose to open a Bull Put spread below the March lows and if you are wrong, then just convert it either into a butterfly or convert into a bearish ratio spread. There are many more choices with options as opposed to trading shares.