How to Play Next “Black Swan” Bear Leg

How to Play Next “Black Swan” Bear Leg

Which side are you at? Bull or Bear? Based on the current market sentiments, general bullish bias, feeling of missing last up leg and given that every indicator is screaming buy buy buy, chances are that you are on the Bull’s side. If so, there is not much point reading this post any further.

There are still a few perma-bears (and they have solid record to attach) are predicting about March lows being penetrated or touched again. This kept me thinking if I should listen to what they are saying given their past history.  So I worked out a low risk strategy that is explained later in the post. What if they (and hence my bet) is wrong, I’ll lose 100% of 1% trading capital that I have invested in this idea. But what if, even though it is only 4% probability, these guys are correct? First trade has potential to return over +2,800% with 4% delta based probability (by Dec’09 expiration) and another trade has potential to generate +700% with 24% probability (by Nov’09 expiration).

Here is Bob Prechter, the Elliott Fame guy, who thinks March lows will be touched again. He thinks that next wave down will be very large, larger than what we have already experienced.

Most of these guys were ahead of the game when the decline happened last year.

The below trades are “Very Low Probability, High Reward” trade ideas, or let me call it “Black Swan Trade“.  (Disclaimer- Pls do your due diligence before investing a single dollar in any of these and pls note you may lose all the capital)

The First trade is on VIX– 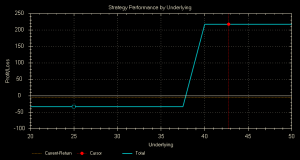 The $0.30 investment has potential to make upto $2.20, over +700% returns if VIX goes past 40. Again a low probability event but also compensated by a very low level of investment.

Buy to open a Dec 700/675 Bear Put Spread for $0.85 debit. If you were to believe that these wizards have any predictability power, and if March bottom is in deed revisited, this trade can deliver over 2,800% returns.

Both trades can be opened for a combined investment of $0.85+$0.30=$1.05, which is only 1.05% for a $10k portfolio.  If markets do revisit March lows, even if it is a very low probability, these two combined trade may come out as great winner for the portfolio with minimal investments.

Do your own diligence before investing any single dollar onto these trades. I am in both the trades with my real money but I may close/modify anytime.