Warren Buffett’s Berkshire Hathaway (BRK.A) said Tuesday that it will acquire the remaining shares of railroad operator Burlington Northern Santa Fe (BNI) that it doesn’t already own for $100 per share in cash and stock in a deal valued at approximately $44 billion.

“Our country’s future prosperity depends on its having an efficient and well-maintained rail system,” said Berkshire CEO Warren E. Buffett. “Conversely, America must grow and prosper for railroads to do well. Berkshire’s $34 billion investment in BNSF is a huge bet on that company, CEO Matt Rose and his team, and the railroad industry.”

“Most important of all, however, it’s an all-in wager on the economic future of the United States,” said Buffett. “I love these bets.”

Closing of the transaction is expected to occur during the first quarter of 2010. And that’s where I want to use it for a trade idea.

Warren Buffett has minted good sum from BNI by selling lots of puts during the market sell-off. We covered it on OP discussion forum during Nov 2008 here , these contracts were sold for $7 premium and hence essentially lowering the cost of purchase to $73.

If he has offered $100, then why market is selling BNI for 97.5? maybe, he won’t find funding, he may back out, the deal may fall apart, regulators may stop it or some other technical or non-technical blah blah. 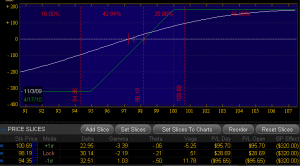 Disclaimer– Pls do your due diligence before investing any money in it. M&A plays can be risky and therefore don’t invest anything that you can’t afford to lose. As a good operating discipline, you should not invest over 1-3% in any single speculative trade.