It was an intense sell-off day with down volume accounting for over 90%. All of the major indices have now broken and closed below their September 25th lows and their uptrends dating from the July 8th. Chicago PMI had already provided hints that things aren’t that rosy yet. But hey, who knows. This might be a short term pull back, to quench the bears’ thirst, before new advance resume. Whatever your outlook is, play it cautiously. 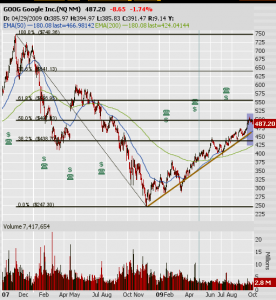 Usually not many traders want to play bearish trades on Google (GOOG) but sometime one has to take a chance. Based on current market behavior of Google , based on a very simple technical analysis, there was/is high probability that it was/is ready to be cooked for a bearish recipe. Albeit, that was two days ago when I shared “Speculative trade idea” to the OPNewsletter subscribers.

I am bearish on GOOG (yes i know everyone else is drumming on a different beat)…I am in with a 500/510 BCS and 450/470/430 put butterfly (roughly about $2). If you do decide to play…play only if your risk capital is less than 1-2%..and something you can afford to lose…else just stay away and let’s see how the trade unfolds. 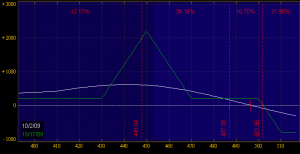 The above trade will make money as long as Google stays below $501 by Oct expiration and a greater deal of money if Google were to retarce just by 5-7% or even midway to rising trend line support.  Attached is the Risk/reward curve of the combination trade. So here we are, as yesterday close, the trade is up +19.6%.

We also have another bearish play (FXP) on China. Yes, now you may wonder why bearish play on China, here is why-

Here is another speculative trade idea-
This is linked to China’s 60th anniversary on Oct 1; this is a bearish trade (FXP). The Chinese markets have been on a roll for the whole of this year driven by stimulus spending, etc. I am not sure if this will continue or not post celebrations. If it doesn’t, the payouts could be big. If not, then we might just lose some of the option value.

I personally chose FXP Nov 9 calls which are up almost +100% since then. Even the underlying FXP is up +15%. Hong Kong is down almost 2.5% today, but we shall see how Shanghai behaves once markets re-open post holidays.

These are two of 5 total trades (other ones are POT, MON and GLD) that were shared as part of the speculative trades/bonus alerts to the OPNewsletter subscribers.  For Oct’09 OPNewsletter, we are up +5% so far with 88% capital invested across 5 different income portfolios.