It was yet another 90% down day, after an “interesting” Friday as expected. I did mention about purchasing some OOM calls before market close on Thursdays in anticipation of Friday move (which follows a consistent pattern). Yesterday was highest intraday range for SPX since Nov 7 drop. As of close Feb 25 2013, I have the first sell signal of 2013 when both of my vol indicators are in the SELL Mode. This drop benefited our positions for OPNewsletter (DIA bearish diagonals) and RUT OOM bearish butterfly. And the wait was worthwhile, now we can open new portfolios for OPNewsletter.

Not a big rocket science. It’s just that it is following some pattern (until it isn’t). I have already shared my thought on GOOG and AAPL. There a lot of other stocks which has already given primary sell signals that I shall be sharing with OPNewsletter members via OPNExtra!

Recall I mentioned my key learnings at the beginning of the year, I am playing to the tunes of music Uncle Ben is playing, but I am dancing closer to the door. The next support level for SPX is around 1476, and if you didn’t exit around 1528-30; you may want to consider this door and comeback at better prices or when the rally resumes. 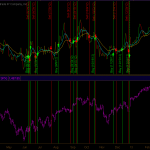 Chart is attached for one of the indicators I use. You may see the effectiveness. I fine tune it with the help of 2nd indicator which is not shared. As with other indicators, this doesn’t work very well during choppiness but following this indicator alone, would have generated some massive gains e.g. Mar 2012 (almost 100points), Oct 2012 (almost 100 points), Dec 31/2012 (almost 105 points)…these were mentioned in OP forums as and when those were triggering.  Is every sell signal a sell signal? not necessarily. But every selling was preceded by the sell signal.

Have fun. if we do get pull backs ahead, please don’t forget to share with others that you were shared this at OptionPundit firsthand
(if you would like to join for OPNewsletter, pls click here

Disclaimer- This is for information and entertainment. Nothing mentioned here is an investment advice. Pls do your due diligence before investing