Over past 2-3 decades, Stock Market Technical analysis has developed into a full professional career. And if one is willing to learn and master it, there are certified programs like Chartered Market Technicians or popularly known as CMT. Some traders live by it day-in-day-out, while others think that charts are nothing but randomly distributed events plotted on X-Y Axis. This post isn’t about converting non-believer into believers of Technical Analysis, but to shed some lights on an age old technical indicator that, for me, has been quite effective; and also to share a trading idea.

According to Investopedia, MACD (Moving Average Convergence Divergence), a common technical indicator, calculates the difference between an instrument’s 26-day and 12-day exponential moving averages (EMA). Of the two moving averages that make up MACD, the 12-day EMA, is obviously the faster one, while the 26-day is slower. In the calculation of their values, both moving averages use the closing prices of whatever period is measured. On the MACD chart, a nine-day EMA of MACD itself is plotted as well, and it acts as a trigger for buy and sell decisions. MACD generates a bullish signal when it moves above its own nine-day EMA, and it sends a sell sign when it moves below its nine-day EMA.

MACD is quite a popular technical indicator and is usually amongst the first set of technical indicators that one uses to begin his/ her “technical” trading. You’ll find that almost every technical trader has used it at one time or the other. Many experts change number of days in the formula, based on what suits their trading style.

One of the popular way of using MACD is trading with the divergences. However, according to Investopedia, the divergence trade is not very accurate – it fails more than it succeeds. I have a different perspective.

Let’s review a few examples first before we conclude anything: 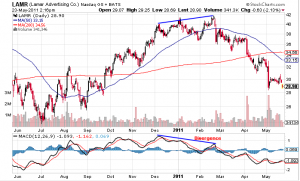 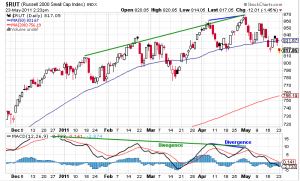 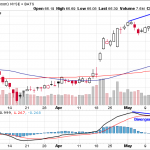 Based on the parameters I use, I have traded AXP and JNJ. Both showed a slight divergence between MACD and price and together with the current market, both also pulled back delivering nice results in a short period of time. I have been testing it on other underlyings for various scenarios.

It is a simple technique that requires some observation and can reward nicely if traded well. So, though broadly divergence trading might not have been that successful, I find that that if one trades divergence in sync (or in the direction) with overall market, the chances of success are more than failure. Said differently, trade Bearish divergence for bearish day/markets and Bullish divergence for the bullish day/ markets. This gives additional lift. 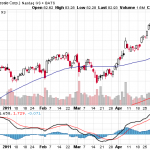 Bearish Divergence for Bearish day or Bullish Divergence for a Bullish day. Keep the profit/exit targets tight and objective. Use options as opposed to buying/selling shares as Options provides some room for adjustment for what if you are wrong.

How about putting this theory/past successful trades to another real trade. Let me share a trade example where I see a bearish price/MACD divergence; this is for COSTCO. Pls see attached chart for COST and you will notice a divergence between price and MACD. COST is near 52wk high levels. I opened COS July 80puts @ 1.645. My Target is to exit at around 25% with either trailing stop or LIMIT order.

Let’s revisit this trade after a few days/weeks and see where is COST.

(Disclaimer– As mentioned above currently I own COST Puts and I may close anytime as I think necessary. As a general rule, I suggest not to invest anything above 2% in directional trades. If you choose to follow this trade, pls do your due diligence before investing even a single $$)икони