So you think you can dance, with the markets?

Sometime back I read a book by Barton Biggs “Wealth, War & Wisdom” where he documented several instances going as far back as WW-II that collectively market participants know what’s coming and hence market starts to show light even when it is pitch dark elsewhere. Sure enough, folks bet their real money once they feel there is some “truth” behind those “light at the end of a tunnel” hypotheses. It is generally true that by the time something makes it to headlines it is already factored into the market moves.

On the other side, I have read and listened to many great investors, market analysts, economists and a wide variety of intelligentsia that “you can’t manipulate primary trend of the markets” unless the excesses of past have returned to normal. But O-Benti trio may have finally done that no one else has done in the past.

Both sides have their own arguments. Personally I have been bearish for some time now. 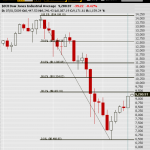 And here we are stock markets have been advancing since March without any interruptions. In fact the, the rally from the July 10 market low has been even more vertical, with fewer interruptions, than the rally from the March low. Isn’t it amazing! (Btw, even with recent high on Dow has not yet recovered to 38.2% fib retracement of the loss from the high of 14,198 to the low of 6,469. That point lays around 9,450)

As Ed Seykota once said, “everybody gets what they want out of the market”. You have both sides of arguments bear as well bull.

But here is the key- BULL OR BEAR IS IN HINDSIGHT.

The concept of bull, bear or trend is in the hindsight. In order to benefit from markets one need to make a decision in “real-time” and the “Bull” or “Bear” is not observable in the real time. What if you purchased stocks at the peak of Oct 11, 2007 soon after breaking-out July’07’s 14,000 record? In real-time it might have been a break-out play. In hindsight, it was a top before a massive decline started. I am sure there will be wisemen who might have spotted the top on the day itself, I am not that privileged. I realized only about 1 month later. A majority of the “feelings” for this post are inspried from John of Hussman Funds’ latest letter whose opinions I respect. You may want to read his thoughts here. As he says –

“The prevailing status is not observable in real time, so we rely instead on variables that are continuously measurable, focusing on full-cycle performance, and accepting that hindsight will only sometimes be kind to our assessment, and will sometimes be utterly cruel”.

I started preparing for a upcoming bull market on Nov 14, 2008 and shared a specific pick called ZINC which some OPN members picked for $3. It was an easy pick based on “margin of safety” and “true value”. Today it sells for $11. There are many more examples. So, why OPN didn’t participate in this magnificent rally? Because the rally from Nov low never showed any signs of bulls returning to market place. Following Oct low, we saw Nov low, Jan low, Feb low and “finally” the March low and ever since it’s been creeping higher and higher. Of course , in the hindsight, it was a clear up-trend since then. We all know, this downturn was (is) much bigger in scale and severity that were observed in other recessions post great depression (as we were told and made to believe and assuming it is true). How come this “bottom” didn’t register value even closer to mild recessions post WW-2? At March low, none of the typical indications of a bear market bottom were in place; yields were nowhere closer to true market bottoms of the past, sentiments were far too optimistic; price/volume sponsorship wasn’t there; in July, in fact Lowry’s buying power indexed even dropped below its March “bottom” low even after registering such a rally. In the 76-year history of Lowry’s statistics this has never happened following any true bear market bottom.

Neither I nor OPNewsletter enjoyed much success from riding trends/ short term gains from speculative investment for major capital of the portfolio especially when it has high probability of faltering. OPNewsletter trades are based on probability and at times my personal bias that I think are best suited to my invest profile (OPNewsletter is not an investment advisory letter, it is to share part of the trades that I do in my real money account). It has served so far very well in both types of markets i.e. raging bulls of 2007 and massive bear markets of 2008 slipping into 2009.

If I knew I could speculate and ride on trends and still get OPN subscribers out wihout losses, I would do it as I generally do it via speculative trades/bonus trade alerts for a fraction of capital. But I don’t know how to do that with majority of capital and without shophisticated system that retail trders/OPN subcribers may not have. It’s frustrating to have missed what has turned out in hindsight to be a significant rally in past couple of weeks. I have simply have not had the evidence to say “Yes, the conditions are now good to with bulls and follow the trend”. Also add the last hour rallies which sometime reverse the whole game plan. X has moved from $43 to $30 to $40 to mid 30s and then back to $45 and GDX was no different. SPX has moved almost 2 STD deviations all in a span of less than 1 month and intraday swings are becoming large. OPN is not designed for intra-day trading, rather for achieving sustained results via balanced risk/reward strategy. I therefore kept probabilities in favor of bear vs. bulls. I’ll admit it, the market situation at this time is a confusing one (though there are smarter men who think it is absolutely clear). But it is not so much for me. The dollar index is falling, bonds are turning weak thus increasing probability of higher interest rates, 2nd wave of foreclosures on the verge, persistent overbought conditions, vertical advance with very poor price/volume sponsorship; I don’t want to stand in front of the locomotive.

One thing I’ve learned after 50 years in this business is that a trend will continue in force until that trend ends — no further, no less. That’s a truism, but unfortunately, I don’t know anyone who can tell us how high a trend will carry or when a trend will end.

And therefore I still have bearish bias while ensuring that we do have some upside protections as well. This is not to say that this is purely a directional strategy but to say that at this point our portfolio favors downside’s probability vs. an upside.This will limit upside gains but if markets do pull back even for a shortwhile, we tend to gain more.