Bit By Bit, Summit to Summit

Bit By Bit, Summit to Summit

Last Friday, S&P500 (SPY) bounced almost 2.5% to score its best one-day percentage gain since December 2011. The move helped fuel a strong weekly gain, but still it wasn’t enough to move stocks out of the red for the quarter.

Another week, another summit, and again a confused market. Ever since Greek financial trouble started to surface in mass media during early 2010, market movements are surrounded by speculations mainly on Euro i.e. what will happen to Euro, Greece etc. Since then, hardly a week goes by when mass media doesn’t refer market rallies or pullbacks to “Euro” in one form or the other. I think, now, governments have also become smarter and know well how to manage market participants better. If you trade full-time, you will notice many last hour rallies which are driven by “news” in some mass media, the “news” that may or may not have any meaningful substance to it. But a market participant still needing to trade usually operates via “Buy first, think later” mode (or vice versa in extreme negative cases). By the time thinking is clear, markets already move to a new reference point which warrants a new strategy. This also reflects via shortening half-life of key event’s impact on financial markets.

For a perspective on increasing daily ranges, look at the chart attached. Though it pales in comparison to last August to October period, still >1.0% daily moves are increasing and so are the 90% down days. So far during this year, there were seven 90% down days and three 90% up days. Even though markets rebounded sharply on Friday, it was not a 90% up day. (Separately, here is a good read from John Hussman about current state of markets- Anatomy of a bear market) 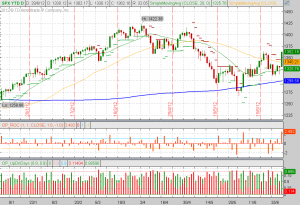 So many summits were organized during the past two years. In spite of many doom’s day predictions, neither the Greece is out of Euro zone nor has Euro broken-up, so far. Every summit is cited as “make or break” summit and therefore number of scenarios are prepared before every summit. As an income trader, I also need to continue to place hedges even though I know whatever the outcome, there is always a “Central Planner Put” or call it “Global Bernanke put” which won’t allow markets to fall. Albeit, most market participant still can’t take chances. And I think governments understand this behavior much better now.

Markets are not what used to be. For average retail day trader, this market presents lot of changes. As Jeff Augen mentioned when I interviewed him–

Before 2007/08 financial crisis, markets were stable. Volatility was low, markets were rallying. There were hardly any “flash crashes” and terrorist attacks were the only major uncertainty. However, since 2008 market structures have changed. Government involvement, inter connectivity of global markets and evolution of HFTs all have now changed the way markets react to news. Individuals who limit themselves to using traditional off-the-shelf indicators will always lose money to sophisticated traders armed with more powerful tools. The days of buying and selling stocks when moving averages cross or an oscillator reaches one side of a channel are gone. Moreover, investors who fool themselves into believing that they can exploit combinations of these indicators are making a huge mistake. Times have changed. Now program trading accounts for almost 80% of the trades. Super computers are being used and accordingly character of the trades has also changed. An example of how markets have changed is the intraday volatility; since 1990 S&P has experienced intraday High-Low transitions > 8% only 14times, 13 of which occurred in last 2 years. Today’s sophisticated investors tend to focus their attention on analyzing subtle statistical distortions in volatility and identifying anomalies in derivative prices.

The change in market environment implies that a trader now has to be more agile and always need to keep in mind that he is trading against the machines. As oppose to a human trader, machines are monitoring and analyzing markets on almost every tick.

In addition to anticipating underlying’s move, the trader now also needs to think about possible government interventions and its impacts while keeping a track of global events too.

Once a trader starts to realize that there are no short cuts, and making money is hard work, he may develop systems and strategies which also incorporate non-traditional methods e.g. volatility, volatility arbitrage, etc and mix it with “what if” scenarios. He will then, as Jeff mentioned, have to continuously improve his observation and move-up to educate to learn to trade complexities i.e. beyond just buying/selling stocks. This doesn’t mean buy and hold is irrelevant (that is a different topic), but it means that individual investors will have to be more vigilant about their holdings vs. what it used to be in the past.

Everyone likes things to be simple; backtesting and hindsight can always make for a perfect trade. Money is, however, made using foresight based on observations, skill-set and a system to manage a trader’s greatest enemy i.e. emotions.

Now that window dressing and the summit is over, wish you a great 2nd half of the 2012.