Baidu.com (BIDU) announced solid results after the hours. The stocks is up $90 in the after hours trading. Here are details about BIDU’s earnings from briefing.com 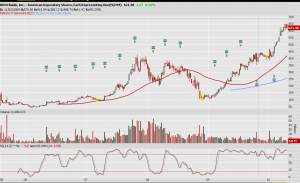 As you may see; the performance of the stocks has been phenomenal. In fact, after hitting $100.5 in late 2008, the stock has risen over 6times (well almost > 7 times if you include after hours trading); that’s an astonishing performance especially when comparing with the bigger company like Google. Currently BIDU trades at 100times current earnings(TTM) in comparison to Google that trades at about 25times. Almost similar is the case for going forward i.e. BIDU 2x on FPE. On a Price/Cash Flow, BIDU is roughly 64times vs. Google that is 18times (not adjusted for yesterday’s results).

But growth stocks are priced for a different story. In last 10 years, the revenue at BIDU has grown revenue from $1 to $650millions (ttm). In a 1billion+ country, there are only 221,000 active online marketing customers generating <$1,000/customers/quarter. Growing both size and revenue/customer in absence of a big league competitor doesn’t seem that of a big issue (assuming Google closes office in China). I ran a rough reverse DCF model to see what kind of growth BIDU will have to deliver to justify $700 valuation. Assuming $217.5million in earnings, 34.75millions shares outstanding, zero debt, 5% terminal growth rate from 11th year onwards, discount rate as 12% for both short and long term (roughly same as for S&P500); I arrive roughly at 33% CAGR for next 10years to justify $700.

So is it expensive, or is it cheap? While achieving 33% CAGR doesn’t seem impossible, but as BIDU grows in size, it will become more and more difficult to achieve this rate especially if 1) other search engine enters China market and/or 2) BIDU doesn’t gain strength in overseas markets.

Disclaimer– As of this writing I have open positions on BIDU options that I may close anytime. The above data is for rough approximation only. You should do your due diligence before making any investment decisions.