Priceline (PCLN) is set to report it’s earning after market close today. According to briefing.com, consensus is $9.29 for EPA while revenue consensus is $1.416 billion. During the past 8 quarters PCLN has consistent outperformed the expectations, usually by a wide margin.

Based on current Implied Volatility, it is expected to move roughly $36-$38 in either direction. If you look at the IV profile, there is a huge SKEW between Nov weekly and Nov, and then in Dec and Jan series as well. Going into earings, IV is highly elevated as well. 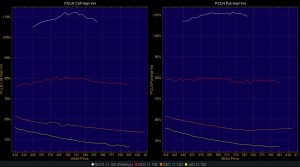 It’s no secret that IV will crash after the earnings. Generally by 40-45 points in the front and roughly 10-15% in the 2nd back months (in this case Dec).  By the way, if this happened in the past, that doesn’t mean it will happen again in the future as well….it’s just that, based on past experience, IV crash, in this pattern, is likely to happen.

So how could one possibly play PCLN earnings?

If you are willing to take directional risk, then 440/450/460 Put butterfly for roughly $0.40 debit (mid quoted as of this writing) could be an speculative play assuming you are bearish like me. The watch out here is-> if PCLN moves positively, then this fly is a toast. You will lose all the capital invested. You might choose similar type butterfly say 550/560/570 call butterfly as well (for a what if on the upside). The watch out with such a strategy is that you will lose capital on both sides if PCLN doesn’t move as much.

There is another popular alternatives as well e.g. Selling an ATM money straddle which will cost roughly $14K (you may reduce that cost by buying wings, essentially converting into a fly) but again you may have to weight the pros and cons of an strategy vs it’s potential rewards.

While there are a lot of choices to play e.g. Calendars, back spreads. ratio spreads and so on, I prefer to play via a  Dec 2011 Iron Condor. Specifically, the Trade structure is like this-

Total Credit- US$3.00 +/-, The Risk on Trade is $7 i.e. one is risking $700 to make $300 by Dec Expiration. And the breakeven points are $593 on the upside and $407 on the lower side. As of this writing PCLN is trading at $505. The idea here is not to make gazillion % like we did sometime back but to make 10-15% without taking a huge risk on either direction.  The gains are expected from the quick IV crush and while providing for a good 10-12% PCLN move in either direction. If however, IV doesn’t drop and/or PCLN strongly moves into either direction, that this trade may not make money tomorrow. It may still make money if by Dec expiration PCLN is in between $407 and $593.

Disclaimer- As of this writing I have several position on PCLN and a few open orders. Pls do your due diligence before investing even a single dollar as you may lose your hard earned capital in a speculative strategy like this and that too very quickly. Pls read the disclaimers to know more.

The assumptions here are that there will IV crash post earnings and a restricted move in PCLN. The  idea is to set a 10%-12% profit target in advance and get out. If there are no returns post earnings but if the trade is still breaking-even or making some gains, get out of the trade unless you think PCLN won’t move beyond breakeven points by Dec expiration. If this doesn’t make money post earning, it serves no good and therefore get out of the trade quickly.