Now neither I have as much resources nor as close information as David may have. But I do want to play according to his bearish bias on MCO. I also want to protect my losses for what if he is wrong?

I am playing it via Put diagonal spread and I shall write put against it month after month. If he turns out to be right, I might multiply my returns. If he is wrong, I may still make money. 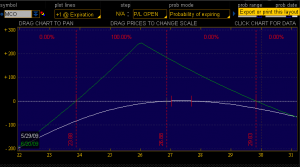 If however, By June 20, MCO stays around $25, the returns will be around $1.20 i.e. +30% for almost 3 weeks holding; and after rolling a new month with new returns will start. The risk to watch out is the sudden drop in the stock; two scenarios either gap-down at open or drift lower during intraday. Not much I can do in the 1st one, but for 2nd scenario I may use intraday trading/swing strategies where buy back the short puts and sell those again at the close or at the “upside reversal” of MCO.

Disclaimer- As of this writing I own the above spread but I may change my position any time. Should you decide to follow this, pls do due diligence before investing. Pls make sure you have worked out risk managemet plan in advance.