Agility Vs Doing Nothing

Agility Vs Doing Nothing

While at times market action may require one to be extremely agile, other times it requires you to do nothing. And the hardest thing for a trader is to do nothing . That’s the business of Trading which deals with human emotions, uncertainly and dependency. This is like uncertainty raised to the power of 3.

Let me elaborate this via example. Below is what I wrote in my general market comments to OPN Member, before market opened today.-

Think again, revised from 2.4% to 1.6%, we are talking a big revision…at least the way I think. Consumer sentiment data will be out in 30mins time @955 est, I don’t think it is going to be good. But in any case I will be glad to be wrong. As I mentioned on Invescafe, I shall close my bullish “personal” positions before that. 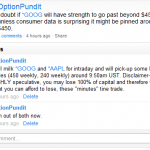 Then on Invescafe, I mentioned that I shall be buying GOOG and AAPL weekly bearish positions before the consumer data. As soon as the data was out, the markets tumbled. Dow dropped almost 100 points from it’s intraday high and we generated almost 100% returns on both apple as well google within 5-6mins. That’s agility (or call it active trading where the trade life span is only few minutes). One the other hand, we have OPNewsletter income portfolios we are not trading actively, almost doing nothing and collecting checks from Mr Theta. Inspite of these volatile moves we are nicely up.

The speculative trades that requires agility are done with fraction of capital, while income trades uses most of the portfolio capital i.e. that’s where the bread-n-butter comes from. When trading markets, it’s important to have nice balance between speculative as well as income trades. Capital allocation becomes a key factor too (Remember- Anything X Zero = Zero). And when the two are combined with a well defined trading discipline, options’ trading becomes easier.

We are doing a few options trades around weeklies. The results are encouraging and inspite of such market fluctuations, the results are encouragning. On AAPL and AMZN we have generated double digit gains in 1 week. To take this trading to a next level, I have also opened a position on NDX (Nasdaq-100) by placing a 1775 calendar (short next week/Long sept) as I expect market to be in a sideways move (I may be wrong) after today’s rally. Attached is the visual representation of options skew between different months. As you can see, these are not normal times. The IV of long dated options is much higher then short dated options. I shall update the results next week.