0
was successfully added to your cart.

A Contrarian View On Nuclear Stocks

A Contrarian View On Nuclear Stocks

Japan is under terrible shock due to triple disasters i.e. a massive earthquake, tsunami and potential radiation hazard from Fukushima reactor that’s devastated by the earthquake. I lived in Japan for several years and experienced earthquakes, cyclones, etc first hand  but of course those are pale in comparison to this massive shock. It’s almost impossible to read newspaper n watch NHK with dry eyes these days. Like millions others, my heart goes out to all Japanese, and I pray for a quicker stop to their sufferings.

In addition to the worrisome health risks of released radioactive material, Fukushima nuclear crisis has triggered a global debate about the future of nuclear power as an important source of energy. As a result of Fukushima disaster, a massive sell-off has also been triggered in nuclear energy related names e.g. CCJ, NLR and URA 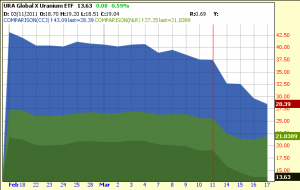 This trading view could sound heartless in light of the horrific images of the disaster. Yet, it is also a fact that nuclear energy is amongst the most potential sources of energy and that this incidence can’t be extrapolated in its current negative form to worldwide nuclear industry as a whole (FYI, European electricity prices has already increased due to this crisis). Emerging markets are dependent on this source of power. Both India and China will need time to find alternatives if nuclear power were to be abandoned. Just google for “future of nuclear power” and you will find huge information telling you about the future potential of nuclear power so I won’t write those here.

With a contrarian perspective I am long both CCJ and URA now but with a stop loss of roughly 25% from here. And I am bullish on Japan so I am long YUK as well. These are short term tactical trades.